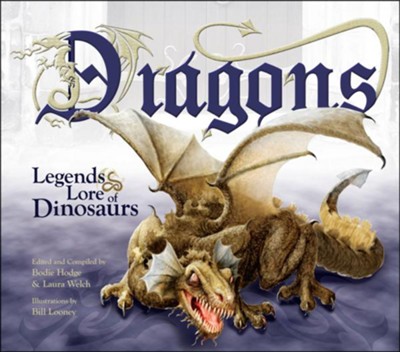 ▼▲
Dragons are often key characters in myths and fairy tales, but were they ever real? To help you discover the truth behind their lives and legacy, this fascinating journey into the past tracks their presence through cultures in Asia, the Americas, and Europe---and reveals dragons' direct connections to the last living dinosaurs. Includes hands-on features. 24 pages, hardcover.

▼▲
Are dragons just the stuff of myths and legends? If so, why do those legends abound all over the world? Master Books provides answers in Dragons: Legends and Lore of Dinosaurs.

This colorful, casebound book fascinated everyone in our household from three years old to fifty-five. Hidden in envelopes, behind doors, and in crannies within the book are some of the widespread legends of dragons from ancient Babylon to ancient South America. Quotations from eyewitnesses as varied as Cicero, Marco Polo, and The Tombstone Epitaph newspaper describe flying monsters that sound and look like dinosaurs that allegedly died out millions of years ago. Written from a creationist perspective, the book explains the evolutionary bias that prevents people from recognizing the obvious: dragons were dinosaurs.

Starting with Deuteronomy 32:33, Bill Looney records verses that refer to dragons. He deals with the passages comparing Satan to a dragon. He lists several legends, such as the legend of England's patron saint, Saint George, which tie dragons to particular saints who allegedly tamed or defeated them.

This fascinating, colorful book will be a great addition to your family's library. It will provide hours of learning and fun while strengthening your child's understanding of Gods creation and increasing his ability to withstand the false teachings of evolution.  Debbie W. Wilson, www.ChristianBookPreviews.com

▼▲
I'm the author/artist and I want to review Dragons: Legends & Lore of Dinosaurs.
Back