We are OPEN and SHIPPING - click here for shipping estimates
Max Lucado's Wemmicks: You Are Special, Board Book
By: Max Lucado 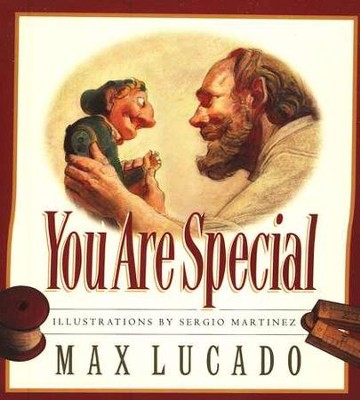 Max Lucado's Wemmicks: You Are Special, Board Book

▼▲
Lucado's cherished classic---now in a sturdy toddler-friendly format! Your 2- to 8-year-olds will love Punchinello, the chipped and homely puppet who thinks he's not worth much---until Eli the godly woodcarver helps him understand how special he is, "marks and all." Teach kids that God loves them just as they are, too! 24 pages, boardbook from Crossway.

The bestselling story of how Punchinello learns that he is special despite his flaws. A condensed version for younger children with the same beautiful message and illustrations.

Karen Hill is a freelance writer and editor. She is the author of several children’s books, including My Faith Journal. Karen and her husband, Art, have three children and three grandchildren.

▼▲
I'm the author/artist and I want to review Max Lucado's Wemmicks: You Are Special, Board Book.
Back
×
Back
×