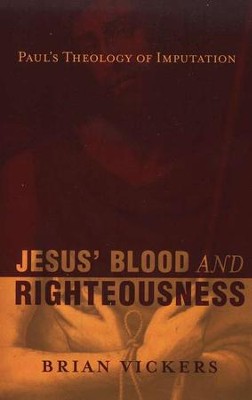 ▼▲
The question of whether Paul teaches that Christ's righteousness is imputed to the believer has been debated for roughly four hundred years. Some of the questions that arise are: What is the connection between Adam and the rest of the human race? How did Christ fulfill the role of the second or new Adam? How can the "ungodly" stand before a righteous God?

In Jesus' Blood and Righteousness, Brian Vickers investigates the key Pauline texts linked historically to the topic of imputation. Though Vickers spends a good deal of time on the particulars of each text, he keeps one eye on the broader biblical horizon; like any doctrine, imputation must be investigated exegetically and synthetically. This book, and its conclusion that the imputation of Christ's righteousness is a legitimate and necessary synthesis of Paul's teaching, is a valuable contribution to the ongoing debate on imputation.

"Vickers's work is sure to be one of the most significant contributions to the ongoing discussion of the nature of the imputation of Christ's righteousness. For the sake of one's own soul, and for richer biblical and theological understanding, I recommend to Christians that they read with care this excellent work."
-Bruce A. Ware, Professor of Christian Theology, Senior Associate Dean, School of Theology, The Southern Baptist Theological Seminary

New Testament professor Brian Vickers shows that the doctrine of imputation isn't just a subject for academic debate; it strikes at the heart of what it means to be right with God.

▼▲
I'm the author/artist and I want to review Jesus' Blood and Righteousness.
Back
×
Back
×