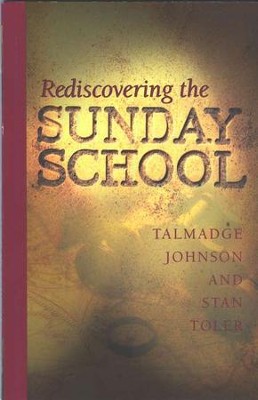 ▼▲
Sunday school is more than action songs or adult Bible study! It's a people-focused, purpose-powered, life-transforming link between the church and the world. Discover new methods for organizing and promoting your Sunday school; using fellowship to reach new people; placing new emphasis on teaching the basics of Christianity; and more. 118 pages, softcover from Beacon Hill.

▼▲
Sunday School is a time-honored tradition that is linking the church and the world in redemptive ministry. A renewal is occurring in the Christian community that gives the Sunday School unlimited opportunity for evangelism and education, devotion and discipleship. Catch the vision of a new standard Talmadge Johnson and Stan Toler offers in Rediscovering the Sunday School as it outlines timely methods of Bible study, organization, staffing, promotion, and facilities. Give your Sunday School a breath of new life with this insightful and challenging book. Paper.

▼▲
An international speaker, best selling author, and compassionate teacher, Stan has authored more than ninety books to date. His books have sold more than three million copies worldwide.Stan served for forty years as a pastor, and was named General Superintendent Emeritus by the Church of the Nazarene. He was vice president of John Maxwell’s Injoy Ministries, has spoken in eighty countries, and shared the platform with speakers including Zig Ziglar, Jerry Lucas, Rick Warren, Bill Hybels, and Cy Young baseball great R.A. Dickey. Dr. W. Talmadge Johnson is a general superintendent in the Church of the Nazarene with an office at the International Center of the denomination in Kansas City, Missouri. He was elected at the 25th General Assembly in Indianapolis, Indiana, in June 2001. At the time of his election, he was serving as director of Sunday School Ministries, a position he had held since July 1, 1994.A graduate of Southern Nazarene University, Dr. Johnson received the bachelor of arts and the master of arts degrees in religion. Trevecca Nazarene University honored him with the doctor of divinity degree in 1983. Additionally, his alma mater, Southern Nazarene University, conferred upon him the doctor of divinity degree in 2000. He co-authored with Dr. Stan Toler the book, Rediscovering the Sunday School.He and his wife, Genell, have two sons, Michael and Jeffrey, who with their families serve in special ministries in the Church of the Nazarene.

▼▲
I'm the author/artist and I want to review Rediscovering the Sunday School.
Back
Back