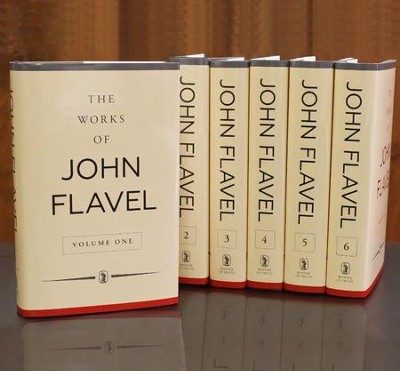 By: John Flavel
Banner of Truth / 1997 / Hardcover
5 out of 5 stars (2 Reviews) Write a Review
In Stock
This product ships free to addresses in the US!
(Just select Standard shipping at checkout.)
Stock No: WW1510604

▼▲
The myriad editions of Flavel's Works bear their own witness to his popularity. He was a favorite with Jonathan Edwards and George Whitefield (who ranked him with John Bunyan and Matthew Henry), and, a century later, with such Scottish evangelical leaders as R. M. M'Cheyne and Andrew Bonar.

Flavel's complete works had long been unobtainable until we reprinted them in 1968. His six volumes are in themselves a library of the best Puritan divinity and a set will be a life-long treasure to those who possess it. He is one of that small number of evangelical writers who can by their lucidity and simplicity help those at the beginning of the Christian life and at the same time be a strong companion to those who near its end.

▼▲
I'm the author/artist and I want to review Works of John Flavel.
Back
×
Back
×