Skip to main content
How to Survive the Apocalypse: Zombies, Cylons, Faith, and Politics at the End of the World
By: Robert Joustra, Alissa Wilkinson
Stock No: WW872715 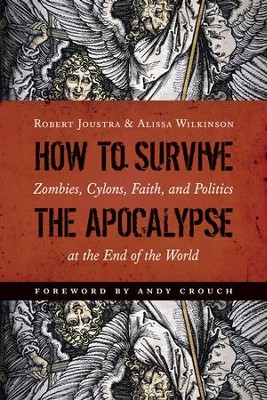 How to Survive the Apocalypse: Zombies, Cylons, Faith, and Politics at the End of the World

▼▲
In How to Survive the Apocalypse, Robert Joustra and Alissa Wilkinson examine a number of popular stories - from the Cylons in Battlestar Galactica to the purging of innocence in Game of Thrones to the hordes of zombies in The Walking Dead - and argue that such apocalyptic stories reveal a lot about us here and now, about how we conceive of our life together, including some of our deepest tensions and anxieties.

▼▲
Incisive insights into contemporary pop culture and its apocalyptic bent

The world is going to hell. So begins this book, pointing to the prevalence of apocalypse — cataclysmic destruction and nightmarish end-of-the-world scenarios — in contemporary entertainment.

In How to Survive the Apocalypse Robert Joustra and Alissa Wilkinson examine a number of popular stories — from the Cylons in Battlestar Galactica to the purging of innocence in Game of Thrones to the hordes of zombies in The Walking Dead — and argue that such apocalyptic stories reveal a lot about us here and now, about how we conceive of our life together, including some of our deepest tensions and anxieties.

Besides analyzing the dsytopian shift in popular culture, Joustra and Wilkinson also suggest how Christians can live faithfully and with integrity in such a cultural context.

▼▲
Robert Joustra is director of the Centre for Christian Scholarship and assistant professor of international studies at Redeemer University College, Ancaster, Ontario.

Alissa Wilkinson is assistant professor of English and humanities at The King’s College, New York City, and chief film critic at Christianity Today.

▼▲
Presbyterian Outlook
"The perfect medicine for societal-wide manifestations of anxiety that keep creeping into our imaginations . . . and our nightmares."

Makoto Fujimura
— artist, speaker, writer, cultural shaper
"In our culture dominated by fear and anxiety, I am grateful for the wisdom of teachers like Robert Joustra and Alissa Wilkinson in How to Survive the Apocalypse. From Mel Brooks to Game of Thrones, from the movie Her to the board game Settlers of Catan, this book is full of deft and engaged analysis, helping all of us to move deeper into our 'secular age' with conviction and faith."

Michael Wear
— founder of Public Square Strategies LLC
"Who said the apocalypse couldn't be fun? I binge-read this book. Wilkinson and Joustra take up some of the most important questions of our day in a fresh way. They give us a guide to the cultural and political terrain we must navigate together, providing encouragement to faithful Christians to enter the public square with confidence and purpose."

Brett McCracken
— film critic, author of Gray Matters and Hipster Christianity
"An exceptional piece of theologically rigorous, culturally perceptive criticism. With Charles Taylor's monumental book A Secular Age as a guide, Joustra and Wilkinson show how narratives of dystopian apocalypse in contemporary films and television reveal deep philosophical, theological, and existential truths about today's world. . . . Whether dissecting Mad Men or The Hunger Games, Scandal or Game of Thrones, this book's analysis is timely, wide-ranging, and coherent, shedding light on power, politics, identity, and more in the twenty-first century."

Richard Mouw
— president emeritus of Fuller Theological Seminary
"Dear Netflix: Hold off on sending Parks and Recreation and start me on the second season of The Walking Dead. After reading this terrific book by Alissa Wilkinson and Robert Joustra, I have decided I am ready for more apocalypse. I had been immersed in the writings of Alasdair MacIntyre and Charles Taylor, but this book helped me connect their philosophical explorations to dystopian narratives. So I am now going to work at coming up with my own informed understandings of zombie plots."

Kevin R. den Dulk
— director of the Henry Institute, Calvin College
"Robert Joustra and Alissa Wilkinson insist the end is not near; it's already here, in the zeitgeist, even if the zombies and robot overlords are still at bay. With philosopher Charles Taylor as their guide, they cast a keen eye on how apocalyptic visions in recent popular culture reflect our rootless search for 'authentic' selves in a secular age. But they also leave us with a compelling alternative to defeatism in the face of the end times — a clear-eyed pluralism rooted in the building of faithful institutions."

Stephanie Summers
— CEO of the Center for Public Justice
"With style and skill, Wilkinson and Joustra demonstrate that popular entertainment tells us something deeply important about ourselves. As our guides on a wide-ranging tour with an itinerary that includes Charles Taylor, Parks and Recreation, and modern political philosophy among many other stops, they lead us to a place where our participation as citizens is wholeheartedly encouraged and affirmed."

Gregory Alan Thornbury
— president of The King's College
"All too often, books on pop culture by Christian scholars, pastors, and theologians lapse into the 'what to think' category. What's different about reading How to Survive the Apocalypse is that we understand better why we're seeing what we're seeing. That's because a political philosopher (Joustra) and a cultural critic (Wilkinson) are probably in better position to guide us as to how our secular age has become perennially obsessed with the fantasy of 'the end of the world.' "

Publishers Weekly
" 'Just turn on the television. . . . Today, apocalypse sells like mad,' write Joustra and Wilkinson. Instead of lamenting secularized versions of the end times, however, the authors engage with them through an in-depth theological critique of popular culture. They note that the idea of future chaos followed by restoration has been a religious theme for millennia, starting with the first apocalyptic text from ancient Egypt. After a fascinating, breakneck rundown of utopian versus dystopian notions from biblical times onward, Joustra and Wilkinson zero in on recent movies and — especially — TV shows. . . . It is refreshing to see a willingness to find the best in secular art, rather than a blanket dismissal of it."

▼▲
I'm the author/artist and I want to review How to Survive the Apocalypse: Zombies, Cylons, Faith, and Politics at the End of the World.
Back
Back