The Shack: Where Tragedy Confronts Eternity
By: William P. Young 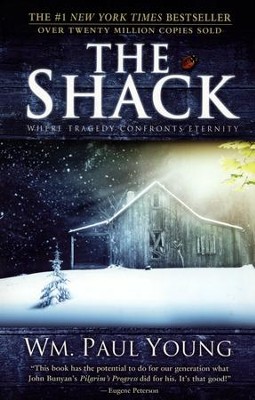 The Shack: Where Tragedy Confronts Eternity

Mack Philips took his children on a camping trip. The boys wanted to squeeze one last canoe ride in before the trip home. Mack rushes to help, when their canoe capsizes. That's when the unspeakable happened! Mack's youngest daughter was abducted by a child predator. After a massive search, evidence of Missy showed up at an abandoned cabin. Although they never found her body, everyone knew the worst had happened. For the next four years "a great sadness" fell over Mack and his family, until a note from God showed up in his mailbox. What happens next will move you to a greater understanding of God's unfailing love for us all.

▼▲
After his daughter's murder, a grieving father confronts God with desperate questions -- and finds unexpected answers -- in this riveting and deeply moving #1 NYT bestseller.
When Mackenzie Allen Phillips's youngest daughter Missy is abducted during a family vacation, he remains hopeful that she'll return home. But then, he discovers evidence that she may have been brutally murdered in an abandoned shack deep in the Oregon wilderness.
Four years later, in this midst of his great sadness, Mack receives a suspicious note that's supposedly from God, inviting him back to that shack for a weekend. Against his better judgment, he arrives on a wintry afternoon and walks back into his darkest nightmare. What he finds there will change his life forever.

▼▲
Wm. Paul Young was born a Canadian and raised among a Stone Age tribe by his missionary parents in the highlands of former New Guinea. He suffered great loss as a child and young adult and now enjoys the "wastefulness of grace" with his family in the Pacific Northwest.

▼▲
Eugene Peterson says this book is as good and as important as The Pilgrims Progress. Well, it really is not. It is neither as good nor as original a story and it lacks the theological precision of Bunyans work. But really, this is a bit of a facile comparison. The Pilgrims Progress, after all, is allegorya story that has a second distinct meaning that is partially hidden behind its literal meaning. The Shack is not meant to be allegory. Nor can The Shack quite be equated with a story like The Lion, the Witch, and the Wardrobe where C.S. Lewis simply asked (and answered) this kind of question: What might Christ become like if there really were a world like Narnia, and He chose to be incarnate and die and rise again in that world as He actually has done in ours? The Shack is in a different category than these more notable Christian works. It seeks to represent the members of the Trinity as they are (or as they could be) and to suggest through them what they might teach were they to appear to us in a similar situation. There is a sense of attempted or perceived reality in this story that is missing in the others. This story is meant to teach theology that Young really believes to be true. The story is a wrapper for the theology. In theory this is well and good; in practice the book is only as good as its theology. And in this case, the theology just is not good enough.

▼▲
I'm the author/artist and I want to review The Shack: Where Tragedy Confronts Eternity.
Back
×
Back
×