EARLY CHRISTMAS SALE: Shop over 900 items up to 85% off through 9/29 >
Just War As Christian Discipleship: Recentering the Tradition in the Church Rather Than the State
By: Daniel M. Bell 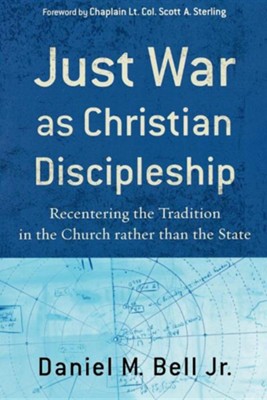 Just War As Christian Discipleship: Recentering the Tradition in the Church Rather Than the State

▼▲
Just War as Christian Discipleship argues that most Americans, seeking to explain their positions on war via the just war tradition in Christianity, actually know little or nothing about what constitutes just war. In this book Daniel Bell seeks to change this lack of knowledge by explicating the history of just war theory, and then applying this information towards interpreting modern wars such as Afghanistan, Iraq, and possible wars with Iran, North Korea, or intervention in Darfur. All of this is done with an eye to reorienting the doctrine back to the church as moral authority, and into the process of discipleship, while taking the theory away from the state. But, Bell argues, the just war tradition can only be properly understood if we understand it not as a list of qualifications, but as an element which keeps Christians accountable for their actions in war. It must be shaped by the foundational convictions of faith confessions or it is nothing more than making excuses.

▼▲
This provocative and timely primer on the just war tradition connects just war to the concrete practices and challenges of the Christian life. Daniel Bell explains that the point is not simply to know the just war tradition but to live it even in the face of the tremendous difficulties associated with war. He shows how just war practice, if it is to be understood as a faithful form of Christian discipleship, must be rooted in and shaped by the fundamental convictions and confessions of the faith. The book includes a foreword by an Army chaplain who has served in Iraq and study questions for group use.

▼▲
Daniel M. Bell Jr. (PhD, Duke University) is professor of theological ethics at Lutheran Theological Southern Seminary in Columbia, South Carolina. He has worked extensively with both retired and active duty military personnel on the just war tradition. Bell is an ordained elder in the United Methodist Church and the author of Liberation Theology after the End of History.

▼▲
I'm the author/artist and I want to review Just War As Christian Discipleship: Recentering the Tradition in the Church Rather Than the State.
Back
×
Back
×