Skip to main content
Predestination: The American Career of a Contentious Doctrine [Hardcover]
By: Peter Thuesen
Stock No: WW174274 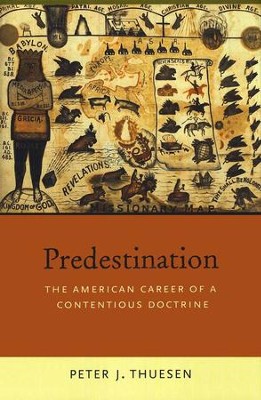 Predestination: The American Career of a Contentious Doctrine [Hardcover]

▼▲
A groundbreaking history of one of Christianity's most fascinating and controversial doctrines. In this lively work, Thuesen explores how the riddle of divine sovereignty vs. human free will has sparked conflict and fueled changes across the denominational map---from Puritan New England, where it drove some to suicidal despair, to contemporary America's "purpose-driven" megachurches. 328 pages, hardcover from Oxford University.

▼▲
Winner of the Christianity Today 2010 Book Award for History/Biography, and praised in Christian Century as "witty...erudite...masterful," this groundbreaking history, the first of its kind, shows that far from being only about the age-old riddle of divine sovereignty versus human free will, the debate over predestination is inseparable from other central Christian beliefs and practices--the efficacy of the sacraments, the existence of purgatory and hell, the extent of God's providential involvement in human affairs--and has fueled theological conflicts across denominations for centuries. Peter Thuesen reexamines not only familiar predestinarians such as the New England Puritans and many later Baptists and Presbyterians, but also non-Calvinists such as Catholics and Lutherans, and shows how even contemporary megachurches preach a "purpose-driven" outlook that owes much to the doctrine of predestination. For anyone wanting a fuller understanding of religion in America,
Predestination offers both historical context on a doctrine that reaches back 1,600 years and a fresh perspective on today's denominational landscape.

▼▲
Peter J. Thuesen is Professor and Chair of the Department of Religious Studies at Indiana University-Purdue University Indianapolis. He is author of In Discordance with the Scriptures: American Protestant Battles over Translating the Bible and editor of The Works of Jonathan Edwards, Vol. 26, Catalogues of Books.

▼▲
"Thuesen's impressive book ultimately demonstrates that pre-destination was damned from the beginning in America. Its Arminian deniers had the advantage of this nation's Enlightenment birth, liberty-loving republican youth, and the biblicism both traditions inspired."
--Lutheran Quarterly
"His thesis is that predestination provides the golden thread that runs through the complex history of American churches Although the thread sometimes runs a little thinner than the author would like, the book is commendably concise and accessible, filled with insight, and leavened with the occasional flash of dry wit The great virtue of the book is that, without taking sides among the combatants, Mr. Thuesen manages to capture the significance of their enterprise. It is nothing less than an unflinching commitment to living always mindful of the eye of eternity." --Wall Street Journal
"Surprisingly, Thuesen makes the history of a doctrine-one riddled with arcane terminology and hair-splitting distinctions-not only accessible but also engaging. He has produced an intellectual history that puts ideas in their social context and takes seriously the lives of the men and women who thought about them." --Christianity Today
"Peter Thuesen has written a careful and compelling historical account of the way in which predestination has vexed and engaged the church in the United States. . . . This book is a compelling reminder of where we have been, what is entrusted to us, and how much we have forgotten." --Walter Brueggemann, Christian Century

"Peter Thuesen's history of this most intractable of Christian doctrines manages-without ever taking its subject less than seriously-to be surprising, enlightening, and unexpectedly entertaining." --Arnold Hunt, Church Times

"This is a very fine, useful, and readable book." --Choice

"Predestination is a timely book in light of the current wave of debate over Calvinism in American Baptist and evangelical circles. The doctrine of predestination, to which virtually all conservative Christians subscribe in some form, has enjoyed recurring revivals often fraught with great controversy. Thuesen masterfully describes its "career" throughout especially American church history."--Religious Studies Review

▼▲
I'm the author/artist and I want to review Predestination: The American Career of a Contentious Doctrine [Hardcover].
Back
Back