Skip to main content
The Great and Holy War: How World War I Became a Religious Crusade
By: Philip Jenkins
Stock No: WW10514X 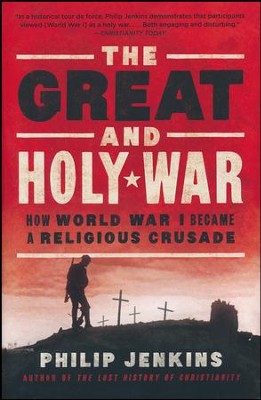 The Great and Holy War: How World War I Became a Religious Crusade

▼▲
"Shocked by its magnitude, its duration, and above all by its staggering human cost, contemporaries labeled the conflict simply the Great War. In a historical tour de force, Jenkins demonstrates that the participants viewed it as a holy war as well. Both engaging and disturbing,"---Christianity Today. 448 pages, softcover.

The Great and Holy War offers the first look at how religion created and prolonged the First World War. At the one-hundredth anniversary of the outbreak of the war, historian Philip Jenkins reveals the powerful religious dimensions of this modern-day crusade, a period that marked a traumatic crisis for Western civilization, with effects that echoed throughout the rest of the twentieth century.

The war was fought by the world's leading Christian nations, who presented the conflict as a holy war. Thanks to the emergence of modern media, a steady stream of patriotic and militaristic rhetoric was given to an unprecedented audience, using language that spoke of holy war and crusade, of apocalypse and Armageddon. But this rhetoric was not mere state propaganda. Jenkins reveals how the widespread belief in angels and apparitions, visions and the supernatural was a driving force throughout the war and shaped all three of the major religions—Christianity, Judaism and Islam—paving the way for modern views of religion and violence. The disappointed hopes and moral compromises that followed the war also shaped the political climate of the rest of the century, giving rise to such phenomena as Nazism, totalitarianism, and communism.

Connecting numerous remarkable incidents and characters—from Karl Barth to Carl Jung, the Christmas Truce to the Armenian Genocide—Jenkins creates a powerful and persuasive narrative that brings together global politics, history, and spiritual crisis as never before and shows how religion informed and motivated circumstances on all sides of the war.

Philip Jenkins, the author of The Lost History of Christianity, Jesus Wars, and The Next Christendom, is the Distinguished Professor of History and member of the Institute for Studies of Religion at Baylor University. He has published articles and op-ed pieces in The Wall Street Journal, New Republic, The Atlantic Monthly, The Washington Post, and The Boston Globe and has been a guest on top national radio shows across the country.

▼▲
“This sweeping, carefully researched book makes sense of a global conflict... [that] redrew the global map and reshaped all the major faiths involved.”
“An astounding chronicle of intense piety inciting acts of terrible carnage.”
“Jenkins’ vividly written synthesis [on World War I] belongs at the top of reading lists on the conflict.”
“In his masterful book Jenkins…firmly establishes that WWI did not just reshape the political landscape, but it created the religious world we exist in today.”
“A painstaking, densely layered study of a time when religious themes underpinned the militarism and nationalism of the embroiled nations. Indeed, as Jenkins carefully portrays, the war changed everything, from the collapse of the old order to the compromising and weakening of world faiths. A work of intensely nuanced research.”
“If you care about religious diversity and the role of faith in global war and peace—then you must get a copy of The Great and Holy War. [A] unique and important look at how the First World War reshaped global conflicts we are still wrestling with a century later.”
“As thoroughly researched as it is readable. Even scholars well versed in the field will learn much from this work. Possessing a superior grasp of the political and military history, the author…presents a perceptive and engaging view of the war …[Jenkins] sets a high standard.”

▼▲
I'm the author/artist and I want to review The Great and Holy War: How World War I Became a Religious Crusade.
Back
Back