Skip to main content
Signs amid the Rubble: The Purposes of God in Human History
By: Lesslie Newbigin
Stock No: WW09898 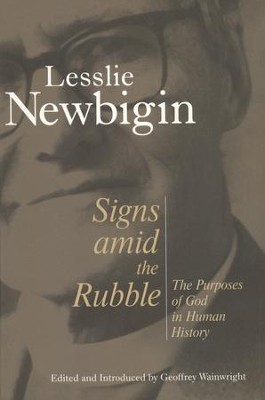 Signs amid the Rubble: The Purposes of God in Human History

▼▲
Ecumenicist Newbigin was widely regarded as one of the 20th century's most significant voices on Christianity and culture. Collected here are previously unpublished works of continuing relevance---his 1941 Bangalore Lectures on God's kingdom and modern "progress," his 1986 Henry Martyn Lectures dealing with Christian mission, and more. 121 pages, softcover from Eerdmans.

(1909-1998) Lesslie Newbigin was born in Newcastle-on-Tyne, U.K., in 1909. He completed his undergraduate studies in Cambridge and then served as Staff Secretary of the Student Christian Movement in Glasgow, Scotland. He studied theology at Westminster College at Cambridge and was ordained by the Presbytery of Edinburgh, Church of Scotland in 1936. That same year Newbigin married Helen Henderson and the two of them left for India where he was to be missionary of the Church of Scotland.

In 1947 Reverend Newbigin was consecrated Bishop in the Church of South India, formed by the union of Anglican, Methodist, and Reformed churches. He also served on the Central Committee of the World Council of Churches and as Chairman of the Advisory Committee on the main theme of the Second Assembly. Other members of the committee included famous theologians such as Barth, Brunner, and Niebuhr.

In 1959 Newbigin was called to be General Secretary of the International Missionary Council with offices in London and New York. He was responsible for carrying through final negotiations for the merger with the World Council of Churches. In 1962 he became the first director of the Division of World Mission and Evangelism, and Associate General Secretary of the World Council of Churches with headquarters in Geneva.

In 1965 he was recalled by the Church of South India as Bishop in Madras and remained there until his retirement in 1974. He lived in London, England, until his death in 1998.

Geoffrey Wainwright (1939–2020) was a leading ecumenist of the Methodist Church, a liturgical expert, and a professor of theology at Duke Divinity School for almost three decades. He also served as president of the American Theological Society from 1996 to 1997.

▼▲
Carl E. Braaten
"This volume of previously unpublished lectures by Lesslie Newbigin is an unexpected gift, thanks to his biographer Geoffrey Wainwright. This gift contains welcome supplements to Newbigin's early seminal writings on ecumenical theology and world missions but also includes his latest critiques of Western pluralist secular society. Newbigin's was a fresh voice of Christian prophecy in the contemporary situation. This ecumenical missionary-theologian foresaw an approaching global future that would be impacted by the fanaticism of Islamic fundamentalism and the idolatry of an unfettered free-market economy. Newbigin believed that the only hope for a free society lies in the truth and power of the gospel of Jesus Christ."

George R. Hunsberger
—Western Theological Seminary
"Here are several treats for readers of Lesslie Newbigin! Longtime readers will be fascinated by Newbigin's earliest ways of expressing themes that became dominant notes in his theological vision. The 1941 Bangalore Lectures on 'the kingdom of God and the idea of progress' were presented when Newbigin was a mere 32 years old! Here we watch his 'missionary encounter with our modern Western culture' as it unfolded sixty years ago, long before he had coined the phrase and charted the course for us late twentieth- and early twenty-first-century Christians in the West.

"New readers as well as old will find in the brief space of Newbigin's three 1986 Henry Martyn Lectures a taste of the missionary theory that was one of Newbigin's greatest contributions to the church. Here he shows what is at stake in the ideological contest between, on the one hand, a Western world that sees itself as beyond the age — or idea — of mission and missionaries and, on the other hand, the church that knows it has been called for that purpose.

"For everyone, Newbigin's brief address on 'gospel and culture' given at the WCC world conference on mission and evangelism in Brazil in 1996, only a little more than a year before his death, will sound the closing notes of his prophetic message to us. Perhaps the address is best likened to the last of 95 theses tacked to the door of our collective cathedrals, calling us to follow in the way of Jesus' mission."

▼▲
I'm the author/artist and I want to review Signs amid the Rubble: The Purposes of God in Human History.
Back
Back