Skip to main content
Who's Afraid of Relativism?: Community, Contingency, and Creaturehood
By: James K.A. Smith
Stock No: WW039737 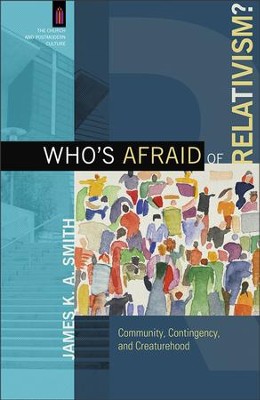 Who's Afraid of Relativism?: Community, Contingency, and Creaturehood

Many Christians view relativism as the antithesis of absolute truth and take it to be the antithesis of the gospel. Smith argues that this reaction is a symptom of a deeper theological problem: an inability to honor the contingency and dependence of our creaturehood. Appreciating our created finitude as the condition under which we know (and were made to know) should compel us to appreciate the contingency of our knowledge without sliding into arbitrariness. Saying "It depends" is not the equivalent of saying "It's not true" or "I don't know." It is simply to recognize the conditions of our knowledge as finite, created, social beings. Pragmatism, says Smith, helps us recover a fundamental Christian appreciation of the contingency of creaturehood.

This addition to an acclaimed series engages key thinkers in modern philosophy with a view to ministry and addresses the challenge of relativism in a creative, original way.

The Church and Postmodern Culture series features high-profile theorists in continental philosophy and contemporary theology writing for a broad, nonspecialist audience interested in the impact of postmodern theory on the faith and practice of the church.

▼▲
James K. A. Smith (PhD, Villanova University) is professor of philosophy at Calvin College in Grand Rapids, Michigan, where he also holds the Gary and Henrietta Byker Chair in Applied Reformed Theology and Worldview. He is the editor of Comment magazine. Smith has authored or edited many books, including Imagining the Kingdom and the Christianity Today Book Award winners Who's Afraid of Postmodernism? and Desiring the Kingdom. He is also editor of the well-received The Church and Postmodern Culture series (www.churchandpomo.org).

▼▲
In Who's Afraid of Relativism? Smith takes a beautiful risk, boldly and successfully making a case for the relevance of pragmatism for contemporary Christian self-understanding. In this remarkable book, he not only succeeds in making the difficult and enigmatic work of complicated thinkers like Wittgenstein, Rorty, and Brandom accessible to the uninitiated (no small task in itself) but also argues convincingly that the pragmatist emphases on contingency and fallibility should play a key role in a Christian understanding of humans as dependent creatures. The mutual hostility between religious thinkers and pragmatists like Rorty is well known; Smith has the wisdom to see past this impasse in a timely and radical effort to encourage contemporary Christians to think differently about themselves.
-Ronald A. Kuipers,
author of Richard Rorty

▼▲
I'm the author/artist and I want to review Who's Afraid of Relativism?: Community, Contingency, and Creaturehood.
Back
Back