Skip to main content
THE MEGA CHRISTMAS SALE: Save up to 85% off through 10/19 >
It Couldn't Just Happen: Knowing the Truth About God's Awesome Creation
By: Lawrence O. Richards
Stock No: WW317141 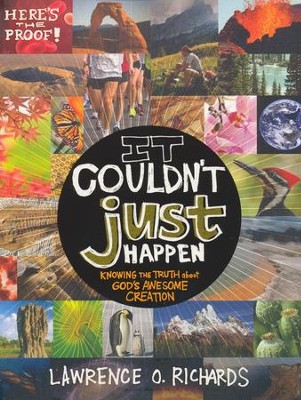 ▼▲
Kids are constantly being bombarded with "truths" about the Theory of Evolution-nip it in the bud with this Gold Medallion Book Award winner that offers solid, Biblical answers to some of the tough questions kids ask about evolution and our world. With fun facts and fun activities, this book will expose your children to Creationism and allow kids (and parents) to develop confidence in their faith, while explaining the beliefs of those who think that life came into existence without God. Recommended for ages 7-12. 192 pages, softcover from Thomas Nelson.

This four-color, Gold Medallion Book Award winner is a perfect tool that offers solid, biblical answers to some of the tough questions kids ask about evolution and our world.

"Did Earth begin with a ’Big Bang’ cosmic explosion?"

"Does science contradict the Bible?"

"What happened to dinosaurs?"

"Is there life on other planets?"

"Did we evolve from apes?"

"What makes my body work on its own?"

Kids are daily exposed to the theory of evolution by the media and public schools. It’s not safe to assume that your kids will reject that theory. It’s up to us as parents and Christian leaders to make sure our children know the truth about the creation of the world. With thousands of evidences to prove He created and sustains the universe, It Couldn’t Just Happen will fascinate kids with fun activities and examples of God’s marvelous works.

Lawrence O. Richards wrote over 200 Christian books, including commentaries on every book of the Bible, features for the bestselling Adventure Bible®, and features for the Teen Study Bible, which he wrote with his wife, Sue.

▼▲
Lawrence O. Richards' book It Couldn't Just Happen: Knowing the Truth about God's Awesome Creation tackles one of the big questions that the scientific world and Christians disagree on: Which is more accurate, creationism or evolution? The first three sections of the book go over information on the formation of the earth, plant life, and animal life. They describe the evolutionist's point of view and contrast it with the Christian viewpoint. In some areas the two are in agreement, but in other areas, such as the age of the planet, the length of eras of certain reptiles and mammals, and the role of oceans and stars and currents, they can disagree radically. Logical points are made by the creationist side to justify a God-honoring stance.

Although the book covers many specific terms, scientific ideas, and historical figures and events, all are presented in a way that makes sense to lay readers. As someone who has read many complicated chapters from science books in school, I found this book better able to explain the ideas of both evolution and creationism. The more personal tone (instead of a bland scientific lecture style) was a factor in readability and understanding the concepts.

Each chapter ends with a "Just for Fun" section that lets the reader exercise the concepts that were discussed in the chapter. It helps wrap up ideas and helps the reader really commit facts and concepts to memory.  Laura Vela, www.ChristianBookPreviews.com

Q: This teaches YOUNG earth (around 6k years), right? NOT the GAP theory, which would insert millions of years, as though God would use that when Hebrew/Greek and Science clearly refute that. I want this clear before I invest in this for my kids.

Dr. Richards does not specifically support any particular viewpoint on the age of the earth, based on the fact that it is not revealed in scripture. Although he puts forth the 24 hour literal creation day, he also presents the gap, day-age and revelatory day theories as views that Christians can hold to. However, he does make it clear that, based on the scriptures, the theory of evolution cannot be a legitimate Christian view.

▼▲
I'm the author/artist and I want to review It Couldn't Just Happen: Knowing the Truth About God's Awesome Creation.
Back