Skip to main content
BIG SUMMER BLOWOUT: Over 2,000 deals ~ up to 85% off, through 8/16. Shop now >
Undivided: A Muslim Daughter, Her Christian Mother, Their Path to Peace
By: Patricia Raybon, Alana Raybon
Stock No: WW913058 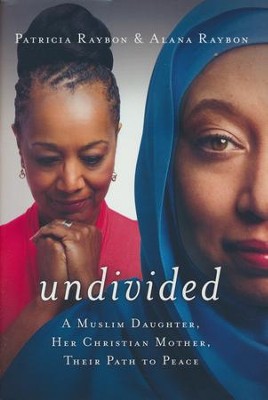 Undivided: A Muslim Daughter, Her Christian Mother, Their Path to Peace

▼▲
Written with rare honesty and striking transparency, Undivided offers an up-close and personal look at the lives of Patricia Raybon, an award-winning author, and her impassioned daughter Alana, a dedicated educator. This is a book for mothers and daughters struggling with interfaith and interpersonal tensions of all kinds, and is equally meaningful for anyone concerned about the conversation that desperately needs to take place in America between Christians and Muslims divided by faith. Hardcover.

"Mom, I have something I need to tell you&hellip;"

They didn’t talk.  Not for ten years.  Not about faith anyway.  Instead, a mother and daughter tiptoed with pain around the deepest gulf in their lives – the daughter’s choice to leave the church, convert to Islam and become a practicing Muslim.  Undivided is a real-time story of healing and understanding with alternating narratives from each as they struggle to learn how to love each other in a whole new way.

Undivided offers an up close and personal look at the life of an Islamic convert—a young American woman—at a time when attitudes are mixed about Muslims (and Muslim women in particular), but interest in such women is high. For anyone troubled by the broader tensions between Islam and the West, this personal story distills this friction into the context of a family relationship—a journey all the more fascinating.

Undivided is a tremendously important book for our time.  Will Patricia be able to fully trust in the Christ who "holds all things together?"  Will Alana find new hope or new understanding as the conversation gets deeper between them?  And can they answer the question that both want desperately to experience, which is "Can we make our torn family whole again?"

Patricia Raybon is the award-winning author of I Told the Mountain to Move, a 2006 Book of the Year finalist in Christianity Today magazine’s annual book awards competition; and My First White Friend, her racial forgiveness memoir that won the Christopher Award. She is also author of the One Year® devotional, God’s Great Blessings. A journalist by training, Patricia has written essays on family and faith, which have been published in the New York Times Sunday Magazine, Newsweek, Chicago Tribune, USA Today, USA Weekend, and In Touch of In Touch Ministries; and aired on National Public Radio. She is also a regular contributor to Today’s Christian Woman online magazine.

Patricia and her husband, Dan, are longtime residents of Colorado and have two grown daughters and five grandchildren. Founder of the Writing Ministry at her Denver church, Patricia coaches and encourages aspiring authors around the country and is a member of the Colorado Authors League and the Authors Guild.


Alana Raybon is a seasoned elementary- and middle-school educator. During the past ten years, she has served as a third-to-seventh-grade lead teacher to a diverse population in Texas and more recently in Tennessee. She has been a mentor to new and student teachers, an advisor to a school’s accreditation process, a tutor, and a member of various school-related committees. Alana and her husband parent their three young children and a teenage stepson. She was featured with her mother in a May 2011 Mother’s Day reflection in Glamour magazine

▼▲
I'm the author/artist and I want to review Undivided: A Muslim Daughter, Her Christian Mother, Their Path to Peace.
Back
Back