Skip to main content
The Myth of Equality: Uncovering the Roots of Injustice and Privilege
By: Ken Wytsma
Stock No: WW845680 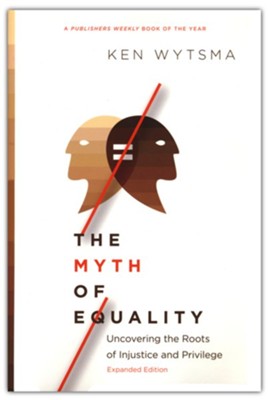 The Myth of Equality: Uncovering the Roots of Injustice and Privilege

Is privilege real or imagined? It's clear that issues of race and equality have come to the forefront in our nation's consciousness. Every week yet another incident involving racial tension splashes across headlines and dominates our news feeds. But it's not easy to unpack the origins of these tensions, and perhaps we wonder whether any of these issues really has anything to do with us. Ken Wytsma, founder of the Justice Conference, understands these questions. He has gone through his own journey of understanding the underpinnings of inequality and privilege. In this timely, insightful book Wytsma unpacks what we need to know to be grounded in conversations about today's race-related issues. And he helps us come to a deeper understanding of both the origins of these issues and the reconciling role we are called to play as witnesses of the gospel. This expanded edition includes a new afterword with further reflections on race and privilege in today's cultural context

Ken Wytsma is the lead pastor of Village Church in Beaverton, Oregon. He is also the founder of The Justice Conference and Kilns College. His books include Pursuing Justice, The Grand Paradox, Create vs. Copy, and Redeeming How We Talk. Royalties from this book will help publish books by authors of color.

"Wytsma has a gift for persuasive argument, well displayed in his deployment of history, biblical theology, and current affairs to demonstrate the subtle and unsubtle ways that white dominance shapes American culture and conversations about race. He does so from the perspective of a passionately committed evangelical Christian calling prophetically for justice for those who have been consistently disadvantaged by a system and culture built on what 'a white normative standard' that shapes perceptions and judgments. Wytsma makes his points without accusation, the better to address an audience of white readers who may be unaccustomed to looking beneath the surface of attitudes about race or unaware of the history of Jim Crow laws and other forces that drove racial segregation. . . . This book should be a wake-up call to Christian communities nationwide."

"Wytsma presents a challenge, particularly to Evangelicals, to step outside their comfort zone and work toward a more inclusive and just society."

" The Myth of Equality is, in fact, mostly aimed at Christian readers. However, this atheist appreciated the entire book’s contents because the scriptural parts and the rest complemented each other and both point to one end: A just culture where the ‘different’ are not diminished, but celebrated. It can’t come too soon, and the author’s efforts will surely help.”

"In this timely, insightful book, Wytsma . . . unpacks what we need to know to be grounded in conversations about today’s race-related issues. And he helps us come to a deeper understanding both of the origins of these issues and of the reconciling role we are called to play as ministers of the gospel."

"This is simply stunning in its insight, its power, its significance. . . . I want to say that this is the most significant Christian book on racism published this year. Or, in many a year. It's that good."

▼▲
I'm the author/artist and I want to review The Myth of Equality: Uncovering the Roots of Injustice and Privilege.
Back
Back