Skip to main content
Church Diversity: Sunday The Most Segregated Day of the Week - eBook
By: Scott Williams
Stock No: WW19787EB 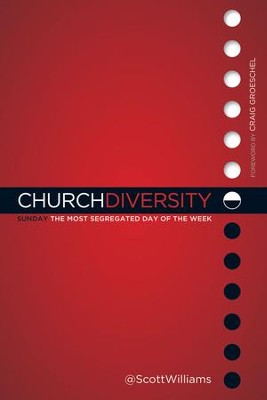 Church Diversity: Sunday The Most Segregated Day of the Week - eBook

By: Scott Williams
New Leaf Publishing / 2011 / ePub
4.5 out of 5 stars for Church Diversity: Sunday The Most Segregated Day of the Week - eBook (7 Reviews) Write a Review
In Stock
Stock No: WW19787EB

▼▲
Dr. Martin Luther King, Jr., once said that 11 o'clock on Sunday morning is "the most segregated hour in America." Forty years later his observation still rings true. Calling you to be an agent of change, Williams offers proven insights to help your congregation engage in fruitful conversations about diversity and welcome everybody into God's house. 192 pages, softcover from New Leaf.

Dr. Martin Luther King, Jr. said it best over 45 years ago: "We must face the sad fact that at 11 o’clock on Sunday morning, when we stand to sing&hellip; we stand in the most segregated hour in America."

What an unfortunate reality that many still face today. Have you ever been asked the question, "Is your church a white church or a black church?"&hellip;No, it’s God’s Church!

Church Diversity discusses topics such as:

This resource is a tool to foster the tough conversations and encourage decision-making to change the face and heart of the Church.

There is already a community out there passionate about this topic and moving the Church forward. Hundreds of them uploaded their photos and can be seen throughout the pages of this book. Their twitter names are also included so you can begin connecting with them today!

WE ARE CHURCH DIVERSITY

"Whatever racial woes we face in America, they cannot be dealt with by politicians or Washington D.C., but rather by the local church&hellip;help our nation navigate through this critical and much needed conversation on race."
- J.C. Watts, Jr., Former Member of Congress

"&hellip;Scott Williams is ever seeking to see this gift opened and embraced. His book, like his life and ministry, is an invitation to the most rewarding of all human journeys."
- Jim Hanon, Writer/Director End of the Spear

Scott Williams served on staff as a key leader and campus pastor at LifeChurch.tv, one of the largest and most innovative churches in America. He is an effective speaker, strategist, ministry consultant, entrepreneur, and popular social media influencer for pastors and ministries around the globe. He is an avid blogger at BigIsTheNewSmall.com. Scott is married, a father of two, and lives in Oklahoma City, OK.

▼▲
Over 50 years ago, Martin Luther King Jr. said, "Eleven o'clock Sunday morning is the most segregated hour in America." Sadly, what was true in Dr. Kings time continues to be true in our time as well.

Scott Williams is a key leader in Lifechurch.tv, a non-denominational church based out of Oklahoma City, Oklahoma. He is an African-American pastor seeking to make his local church and the American church at large more ethnically and racially integrated. Church Diversity is a tour de force on the importance of racial and ethnic diversity in the local churches of America. Williams hits the issue from several angles, and makes a very convincing case.

A big chunk of Williams' book integrates his argument with his personal story. I thought this was a wise idea. It makes the book more readable, it makes clear that Williams has a strong personal investment in the issue he is speaking about, and it bolsters many of the points he is trying to make.

Williams begins Church Diversity by making the argument that the church is, indeed, segregated on Sunday mornings. This is not only true with the black/white divide in American Christianity, it is also demonstrated by myriad small, ethnically driven churches that show up in any decent sized city in the United States. This was evidenced in the testimony of Jayson John, who is a multicultural minister of another church in Oklahoma, and is also of East Indian decent (pp. 71-75).

Church Diversity argues that multi-ethnic, multi-racial churches only come about through deliberate intentionality. The author shares in a convicting chapter that corporate America cares more about diversity that the church does. I think he is right. Williams says, "The only way race will become a non-issue is if we make race an issue" (p. 94).

This intentionality begins with leadership intentionally addressing the issue. Intention, however, is not enough to get very far in building a multi-ethnic church. Toward the end of the book, after making his case, Williams begins to lay out some clear principles for beginning multicultural ministry and transitioning your church into a multicultural church.

All in all, I thought Church Diversity was a unique book on creating multicultural Christian communities. I would have liked to have seen more on the biblical foundation for this. Also, some of the sections of the book were awkwardly stated. I thought Williams could have used some stronger editorial input on some technical aspects of his writing style. But these small weaknesses in this fine book should not keep people from reading it, especially if they live in a multicultural community.  Clint Walker, www.ChristianBookPreviews.com

▼▲
I'm the author/artist and I want to review Church Diversity: Sunday The Most Segregated Day of the Week - eBook.
Back
Back