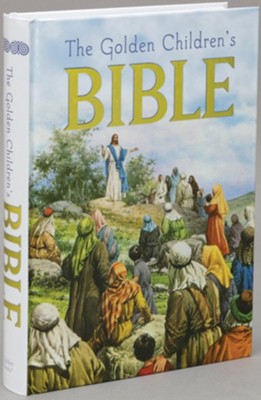 ▼▲
As a fawn drinks from a stream, the serpent proudly observes something from a tree--Eve is offering the forbidden fruit to Adam! The Fall, and all the other timeless stories of the Old and New Testament spring to life for your children through this colorfully illustrated Bible with clear and simple text. It has also been approved by an editorial board consisting of leaders from the Protestant, Catholic, and Jewish faiths. A Golden classic for 30 years! Recommended for ages 8 to 12, 510pages.

▼▲
The children's Bible loved by generations of families!

This beloved edition of the world’s greatest book, beautifully illustrated and written in a clear, simple style for children, has been approved by an editorial board consisting of leaders from the Protestant, Catholic, and Jewish faiths. It consists of six parts: parts one through four drawn from the Old Testament, parts five and six from the New Testament. Each page is alive with stories of every sort of people, their words and deeds, and notated with the books of the Bible they are taken from. . . a perfect introduction to the Bible for young people.

Jose Miralles is an author and illustrator of children's books. He is a regular contributor to Golden Books and LucasBooks for Young Readers. His illustrations have appeared in The Golden Children's Bible and Anakin's Race for Freedom.

Q: Is there anyway to personalize The golden Children's Bible?

Because of the type of cover on this Bible, it cannot be personalized.

▼▲
I'm the author/artist and I want to review The Golden Children's Bible.
Back
Back