A Christmas Carol
By: Charles Dickens
Stock No: WW631201 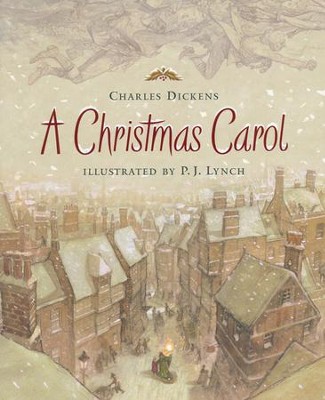 ▼▲
Charles Dickens' classic A Christmas Carol has entertained readers each year since its publication.

Visited on Christmas Eve by the ghost of his departed business partner Jacob Marley, as well as the Ghosts of Christmas Past, Christmas Present, and Christmas Yet-to-Come, Scrooge is both reminded of what he was and shown fully what he has become. Broken down by the sight of his own future neglected grave, as well as the impending death of little Tiny Tim, Scrooge awakes a new man who brings his newfound joy and generosity to his employees and family. . .and who's story inspires generosity in readers with each new Christmas season.

The story of Ebenezer Scrooge opens on a Christmas Eve as cold as Scrooge's own heart. That night, he receives three ghostly visitors: the terrifying spirits of Christmas Past, Present, and Yet to Come. Each takes him on a heart-stopping journey, yielding glimpses of Tiny Tim and Bob Cratchit, the horrifying spectres of Want and Ignorance, even Scrooge's painfully hopeful younger self. Will Scrooge's heart be opened? Can he reverse the miserable future he is forced to see? An unabridged edition gloriously illustrated by the award-winning P.J. Lynch, this story's message of love and goodwill, mercy and self-redemption resonates as keenly as ever.

▼▲
Charles Dickens (1812-1870) is generally regarded as the greatest novelist of the Victorian age. His work, which includes such enduring classics as David Copperfield, Oliver Twist, and Great Expectations, has enthralled readers for generations. A Christmas Carol was an immediate success when first published on December 17, 1843, and has remained continuously in print ever since.

P.J. Lynch is one of the most talented and revered illustrators working today. He has won many awards, including the Mother Goose Award, the Irish Bisto Award twice, and the Kate Greenaway Medal twice — in 1995 for The Christmas Miracle of Jonathan Toomey and again in 1998 for When Jessie Came Across the Sea. P.J. Lynch lives in Dublin, Ireland.

▼▲
I'm the author/artist and I want to review A Christmas Carol.
Back
×
Back
×