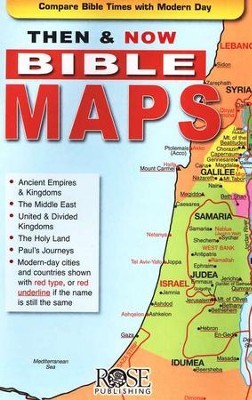 ▼▲
Where are the Bible lands today? Where were Iraq and Iran in Bible times? Find out with the full-color, fold-out pamphlet that contains 17 maps showing ancient cities and countries in black with modern-day boundaries marked in red. A fantastic tool for comparing places in the news with places in the Bible, Then & Now Bible Maps will also help you better understand the events and stories in the Bible by showing you where they occurred in conjunction to modern day locations. Helpful historic information includes: Rose pamphlets have 14 laminated panels, are 8½" x 5½", and unfold to 38"—perfect to slide in most Bibles.

Easily see where Bible places are located today with this slimline pamphlet that fits in most Bible covers! Then and Now® Bible Map Pamphlet includes 17 maps showing biblical cities and countries in black and modern-day map boundaries in red. These bright, colorful Bible maps are affordable and have large print. They cover the major biblical areas: Canaan, Assyria, Babylon, Egypt, Paul's Journeys to Rome, and the land given to the 12 tribes of Israel. The Then & Now® Bible Map Pamphlet is a fantastic Bible study tool.

Most Convenient Bible Maps on the Market!

Covering all major areas mentioned in the Bible, such as Canaan, Babylon, and the Holy Land, this incredible pamphlet helps put Bible stories in context by including modern-day cities and countries in red. Features easy-to-read print, clear graphics, vivid colors, and more! Fits inside most Bible covers, making it easy to reference during personal or group Bible studies.

You will refer to the Then & Now® Bible Maps pamphlet often to see:

You will find Then & Now® Bible Maps is a very useful supplement as you learn more about the Scriptures.

"Where is this Bible place today?" Then & Now® Bible Maps will help you better understand the events and stories in the Bible by showing you where they occurred in comparison to modern day locations. Your Bible study becomes more meaningful when you learn the location of Old Testament Persia and see the places Paul's first missionary journey would take him if traveling the same route today. You will also better understand the biblical context of the places that are in the news every day, like Syria, Lebanon, and Macedonia.

▼▲
I'm the author/artist and I want to review Then & Now Bible Maps, Pamphlet.
Back
Back