Skip to main content
MOTHER'S DAY SALE: Books, Bibles, and more at no-nonsense prices through April 20th. >
The Mystery of the Shemitah Revised and Updated: The 3,000-Year-Old Mystery That Holds the Secret of America's Future, the World's Future ... and Your Future!
By: Jonathan Cahn
Stock No: WW994703 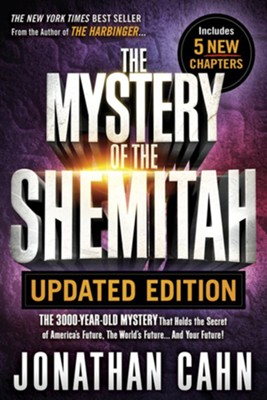 The Mystery of the Shemitah Revised and Updated: The 3,000-Year-Old Mystery That Holds the Secret of America's Future, the World's Future ... and Your Future!

By: Jonathan Cahn
Frontline / 2017 / Paperback
5 out of 5 stars for The Mystery of the Shemitah Revised and Updated: The 3,000-Year-Old Mystery That Holds the Secret of America's Future, the World's Future ... and Your Future! (1 Review) Write a Review
In Stock
Stock No: WW994703

▼▲
New chapters added! The best-selling author of The Harbinger presents a fascinating look at the Sabbath year mandated by the Torah---and its prophetic significance for us today. Learn what the "pattern of sevens" reveals about world events including the Great Depression; the attacks on September 11, 2001; the stock market crash of 2015; and more.

New York Times Best Seller!
Over 2,700 5-Star Reviews
From the author that brought you NEW YORK TIMES best sellers The Book of Mysteries, The Harbinger, and The Paradigm with over 3 MILLION copies sold

"Rabbi Jonathan Cahn is a Jewish prophet who has been chosen to reveal end-time mysteries—vital material to put the last-days puzzle together!"
—Sid Roth | Host, It’s Supernatural!

"The Mystery of the Shemitah is a detailed, compelling, and provocative book for anyone seeking answers to the future of America and the world."
—Marcus D. Lamb | Founder, president, Daystar Television Network

"The Mystery of the Shemitah is the most amazing thing I have ever read! Brilliant and stunning . . . sobering . . . humbling . . . it is undeniable truth. It is one of the most important books of our lifetime!"
—Joseph Farah | Founder, WND â·

The Shemitah occurs every seven years.
Has God already given us clues as to WHAT WILL HAPPEN NEXT?


The Shemitah (shmee-TA), or Sabbath year, is the seventh year of the seven-year agricultural cycle mandated by the Torah for the land of Israel. Understanding this seven-year pattern is essential for understanding the prophecy and mysteries of the Bible that are still applicable today.

In The Mystery of the Shemitah Updated Edition you will discover new insight on current events such as:

▼▲
NEW YORK TIMES BEST SELLING AUTHOR OF THE HARBINGER, THE MYSTERY OF THE SHEMITAH, THE BOOK OF MYSTERIES, AND THE PARADIGM WITH OVER 3 MILLION COPIES SOLD
Jonathan Cahn’s earth-shattering book The Harbinger became an instant New York Times best seller and brought him to national and international prominence, followed by two more best-sellers The Mystery of the Shemitah, and The Book of Mysteries. Long before these books he was known for opening the deep mysteries of Scripture and for teachings of prophetic import. He leads Hope of the World ministries, an international outreach of teaching, evangelism, and compassion projects for the needy. He also leads the Jerusalem Center/Beth Israel, a worship center made up of Jews and Gentiles, people of all backgrounds, just outside New York City, in Wayne, New Jersey. He is a much sought-after speaker and has been called the prophetic voice of our generation. He has spoken at the United Nations on Capitol Hill, and to millions of people around the world.

▼▲
I'm the author/artist and I want to review The Mystery of the Shemitah Revised and Updated: The 3,000-Year-Old Mystery That Holds the Secret of America's Future, the World's Future ... and Your Future!.
Back
×