Skip to main content
THE MEGA CHRISTMAS SALE: Save up to 85% off through 10/19 >
The Mother Letters: Sharing the Laughter, Joy, Struggles, and Hope
By: Amber C. Haines, Seth Haines
Stock No: WW724085 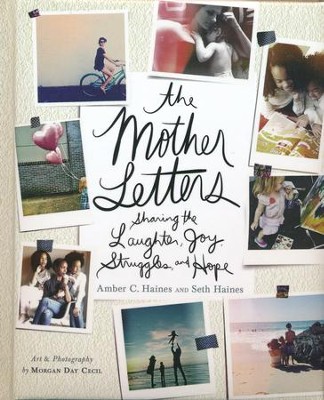 The Mother Letters: Sharing the Laughter, Joy, Struggles, and Hope

When Seth's wife, Amber, gave birth to three boys in three years, he realized she needed heart-to-heart encouragement from somebody who'd been there! So he compiled this spirit-boosting collection as a gift for her. Features over 600 wise, honest, and sometimes hilarious letters from fellow moms including Kristen Welch, Lisa-Jo Baker, and Jessica Turner. Hardcover Gift Book.

Noteworthy: This author is one of a special group of women who writes for (in)courage, the popular online friendship community. Every day they take turns pulling up a chair to share their stories of what Jesus looks like in their every day, gloriously ordinary, and often messy lives.

If you read the (in)courage blog online, then you'll be sure to enjoy this title.

▼▲
After his wife Amber had given birth to three boys in three years, Seth Haines saw that she needed encouragement in the day-to-day drama and details of motherhood. Secretly collecting nearly six hundred wise, honest, and sometimes hilarious letters from other mothers across the world, Seth compiled these "mother letters" as a gift for her. Amber and Seth have chosen the best of those letters--including letters from some of the most influential writers and bloggers online today--to include in a beautiful book perfect for the mother in your life.

Each mother-to-mother letter offers encouragement, advice, and vulnerable honesty about the struggles and joys of motherhood. These letters show that no matter how many times mothers feel like they've failed, they are still doing their greatest work. So for the mom who thinks she's the only one out there who just can't find time for a shower, Mother Letters shows her that she's part of a grand and diverse group of strong women who are saying to her, "Me too. But we can do this."

▼▲
Amber C. Haines, author of Wild in the Hollow, is a soulful writer and blogger at TheRunaMuck.com and a regular contributor to DaySpring's (in)courage. She loves the church and finds community among the broken.

Seth Haines, author of Coming Clean, writes at SethHaines.com and is a regular contributor to various publications.

Together, Seth and Amber make their home in the Arkansas Ozarks with their four boys.

▼▲
I'm the author/artist and I want to review The Mother Letters: Sharing the Laughter, Joy, Struggles, and Hope.
Back
Back