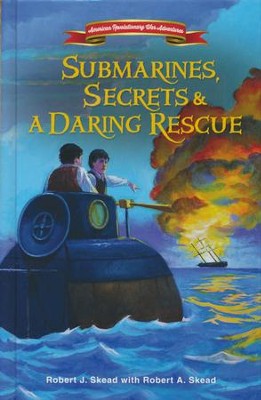 Submarines, Secrets and a Daring Rescue

By: Robert J. Skead
More in American Revolutionary War Adventures Series
ZonderKidz / 2015 / Hardcover
5 out of 5 stars for Submarines, Secrets and a Daring Rescue (2 Reviews) Write a Review
In Stock
Stock No: WW747475

▼▲
In Submarines, Secrets, and a Daring Rescue by Robert J. Skead, fifteen-year-old identical twins Ambrose and John Clark are tasked with the important job of transporting the desperately needed gunpowder to the patriots. But when they end up in an even more dangerous situation, manning one of the first submarines, it seems the worst is behind them. Until they have to attempt a prison break to rescue one of their older brothers. A fictionalized account of true events. Includes discussion questions, a glossary of terms, glossary of historical characters, historical letters, and more! Recommended for ages 9 to 12 years.

In book two of the American Revolutionary War Adventures historical fiction series, readers ages 8-12 can experience the Revolutionary War firsthand in this novel based on actual events. Twins John and Ambrose Clark find themselves aiding the patriots once again as they help work on a top-secret submarine that could end the war &hellip; and also look for a way to rescue their captured older brother.

In addition to bringing alive America’s war for independence, including information on the first submarine built in America, Submarines, Secrets, and a Daring Rescue:

After working as spies to aid the Colonies and delivering a message to General George Washington himself, twins Ambrose and John Clark find themselves volunteering for another mission to help the newly forming United States. This time, the boys step up to help transport much-needed gunpowder to the patriots, and end up in an even more dangerous situation—trying to man one of the first submarines. But the biggest challenge may be finding a way to free their imprisoned older brother.

▼▲
Ambrose and John Clark are back in their second Revolutionary War adventure. Fresh from delivering a top-secret message to George Washington in Patriots, Redcoats, and Spies (2015), the 14-year-old twins have now been recruited to man the American Turtle, the world’s first submersible used in combat, in order to attach explosives to the hull of a British ship. Things are complicated by the fact that Loyalist spies are reporting their every move, and their older brother, Berty, is captured and scheduled to be hanged as a traitor. The story moves at a brisk pace with plenty of musketry and bloodshed, and the technical information about the Turtle’s creation is interesting rather than dull; readers hearing of the submarine for the first time will be intrigued. Discussion questions, a list of the historical characters who appear in the series, a glossary, and reproductions of historical letters support the story and make this a novel that could easily be incorporated into a classroom or homeschool lesson. --- Kara Dean -- Booklist

▼▲
I'm the author/artist and I want to review Submarines, Secrets and a Daring Rescue.
Back
Back