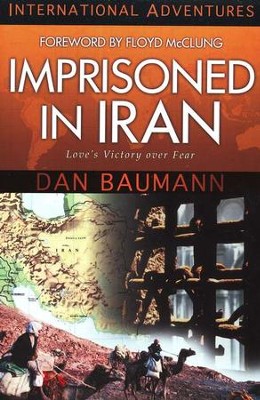 ▼▲
"My name is Dan Baumann and I have recently finished my book entitled Imprisoned in Iran. In 1997, a friend and me, while on a short trip to Iran were taken into custody. I spent 9 weeks in prison in the most infamous prison in Tehran, "Evin Prison". I was kept in solitary confinement, beaten, and constantly interrogated. I received two unofficial death sentences, one for being a CIA spy and one for being a Christian witness. The story tells in detail how we went to Iran, how we were arrested, and how we were miraculously released. The story is written in an easy to read adventure narrative. It tells very honestly both the good and bad momments. Throughout the book it honors God as being the reason for going into Iran and the one behind keeping us alive in prison and eventually helping us get released."

▼▲
"On every continent, in every nation, God is at work in and through the lives of believers. From the streets of Amsterdam to remote Pacific islands to the jungles of Ecuador and beyond, each international adventure that emerges is a dramatic episode that could be directed only by the hand of God. Wrongly accused of espionage and thrown into the most infamous high-security prison in Iran, one American man witnessed the powerful triumph of God's love over fear.

▼▲
I'm the author/artist and I want to review Cell 58: Imprisoned in Iran.
Back