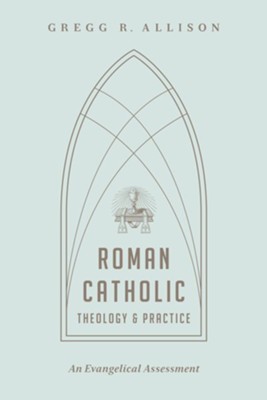 ▼▲
In this balanced volume, Gregg Allison - an evangelical theologian and church historian - helps readers understand the nuances of Roman Catholic teaching. Walking through the official Catechism of the Catholic Church, Allison summarizes and assesses Catholic doctrine from the perspective of both Scripture and evangelical theology.

Noting prominent similarities without glossing over key differences, this book will equip Christians on both sides of the ecclesiastical divide to fruitfully engage in honest dialogue with one another.

A theologian and church historian walks readers through the Catechism of the Catholic Church, winsomely evaluating Roman Catholic doctrine and practice from the perspective of both Scripture and evangelical theology.

Gregg R. Allison (PhD, Trinity Evangelical Divinity School) is professor of Christian theology at the Southern Baptist Theological Seminary. He is secretary of the Evangelical Theological Society, a book review editor for the Journal of the Evangelical Theological Society, an elder at Sojourn Community Church, and a theological strategist for Harbor Network. Allison has taught at several colleges and seminaries, including Western Seminary in Portland, Oregon, and Trinity Evangelical Divinity School in Deerfield, Illinois, and is the author of numerous books, including Historical Theology; Sojourners and Strangers; and Roman Catholic Theology and Practice.

▼▲
If you are looking for a few bullet-points and caricatures, this book will disappoint. But if you are looking for a serious survey drawn from the Catholic Catechism and other primary sources, along with an evangelical assessment of each point, Professor Allison's labors will pay rich dividends.
-Michael Horton,
Westminster Seminary California

This book is good news to those who have long desired a reliable theological guide in dealing with Roman Catholicism. Based on a painstaking analysis of the 1992 Catechism of the Catholic Church, it covers the all-embracing trajectory of Roman Catholic theology and practice. Instead of juxtaposing ephemeral impressions and disconnected data, Allison provides a theological framework that accounts for the complexity of the Roman Catholic system and its dynamic unity. This book is to be commended for its biblical depth, theological acuteness, historical alertness, and systemic awareness. My hope is that this landmark book will reorient evangelical theology away from its attraction for a shallow ecumenicity with Rome toward a serious dialogue based on the Word of God.
-Leonardo De Chirico,
Istituto di Formazione Evangelica e Documentazione, Padova (Italy)

Writing with an irenic and thoughtful tone, Allison engages with Rome via the Church's official Catechism and helps the reader understand what Protestants and Roman Catholics share in common and where they differ. This book is neither spinelessly ecumenical nor harshly polemical, but a fair and principled engagement with the beliefs of Rome.
-Carl R. Trueman,
Westminster Theological Seminary

A very useful evangelical assessment of Roman Catholicism. Unlike so many such books, it does not concentrate merely on points of difference, but considers the whole sweep of Roman Catholic teaching, as set out in the Catechism of the Catholic Church. It affirms points of agreement as well as noting points of disagreement. It acknowledges that evangelicalism is not monochromatic and points to areas where some evangelicals would agree with Rome while others would not. This is a thorough guide that is warmly to be commended.
-Anthony Lane,
London School of Theology

With his characteristic depth and clarity, Gregg Allison escorts readers to the Catholic/Protestant intersection to analyze theological commonalities and differences. In addition to yielding indispensable insight, this volume exemplifies the sort of warmhearted and principled approach that today's conversation desperately needs.
-Chris Castaldo,
Director, Ministry of Gospel Renewal, Wheaton College

Protestants and Catholics need to invent a new kind of relationship. The fire and sword of the Reformation era were unworthy of Christ; so were the desperate efforts of irresponsible leaders in the past century to deny that we ever really disagreed. Can we preach different views of the gospel and still love each other? If so, how do we understand that relationship, spiritually and ecclesially? With a systematic thoroughness worthy of Thomas Aquinas himself, Gregg Allison lays out the theological issues at stake. He provides a full overview of the questions that face us, and his commitment to fully love his Catholic neighbors while fully speaking the truth to them shows us how to handle our disagreements in a manner worthy of Christ. This book will reward the careful study it invites.
-Greg Forster,
Program Director, Kern Family Foundation

▼▲
I'm the author/artist and I want to review Roman Catholic Theology and Practice: An Evangelical Assessment.
Back
Back