Skip to main content
God's Wisdom for Navigating Life: A Year of Daily Devotions in the Book of Proverbs
By: Timothy Keller, Kathy Keller
Stock No: WW222097 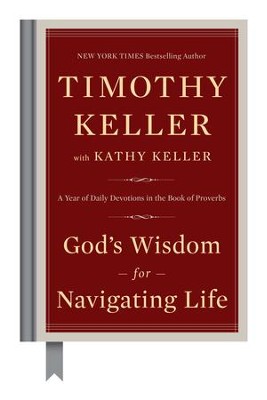 God's Wisdom for Navigating Life: A Year of Daily Devotions in the Book of Proverbs

▼▲
What does it mean to live a moral life? Unlock the wisdom God provides within the poetry of Proverbs! In this 365-day devotional, the Kellers offer a fresh, inspiring lesson for every day of the year to guide you toward a renewed understanding of the essence and goal of leading a Christian life. Each day's reading includes a selection from Proverbs, a thoughtful reflection, and a prayer to help you internalize its wisdom. Hardcover with ribbon bookmark.

▼▲
From pastor and New York Times bestselling author Timothy Keller comes a beautifully packaged, yearlong daily devotional based on the Book of Proverbs.

Proverbs is God’s book of wisdom, teaching us the essence and goal of a Christian life. In this 365-day devotional, Timothy Keller offers readers a fresh, inspiring lesson for every day of the year based on different passages within the Book of Proverbs. With his trademark knowledge, Keller unlocks the wisdom within the poetry of Proverbs and guides us toward a new understanding of what it means to live a moral life. God’s Wisdom for Navigating Life is a book that readers will be able to turn to every day, year after year, to cultivate a deeper, more fulfilling relationship with God. This makes a perfect companion to Keller’s devotional on the Psalms, The Songs of Jesus.

▼▲
Timothy Keller was born and raised in Pennsylvania and educated at Bucknell University, Gordon-Conwell Theological Seminary, and Westminster Theological Seminary. His first pastorate was in Hopewell, Virginia. In 1989 he started Redeemer Presbyterian Church in New York City with his wife, Kathy, and their three sons. Today, Redeemer has nearly six thousand regular Sunday attendees and has helped to start more than three hundred new churches around the world. He is the author of Hidden Christmas, Making Sense of God, and The Songs of Jesus, as well as The Meaning of Marriage, The Prodigal God, and The Reason for God, among others.

Kathy Keller received her MA in theological studies at Gordon-Conwell Theological Seminary. Kathy cowrote The Meaning of Marriage and The Songs of Jesus with Tim. God’s Wisdom for Navigating Life is their third collaboration.

▼▲
Named one of the "World's 50 Greatest Leaders" by Fortune

"Through the Kellers’ beautifully written devotionals, readers will be inspired and motivated to practice what they read ’in thought, word, attitude or deed.’"
—BookPage

"At Redeemer Presbyterian and in several books, Keller shaped a vision of Evangelicalism that de-emphasizes politics and stresses care for the poor, personal sacrifice, and inclusiveness across ethnicity and class."
—Fortune

▼▲
I'm the author/artist and I want to review God's Wisdom for Navigating Life: A Year of Daily Devotions in the Book of Proverbs.
Back
Back