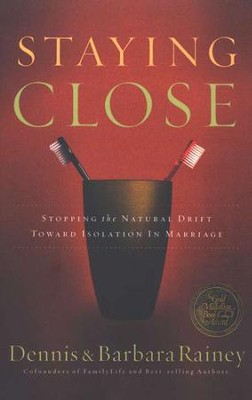 Staying Close: Stopping the Natural Drift Toward Isolation in Marriage

▼▲
If you would you like to experience unity in your marriage and avoid drifting apart from your spouse, then Staying Close by Dennis & Barbara Rainey can help you stay the course. Using a positive and effective strategy, the Raineys teach you to recognize the forces at work that isolate and how to create an atmosphere conducive to good communication. Paperback.

Countless married couples end up living alone – in the same house. Over twenty-eight years of conducting "Weekend to Remember" conferences have convinced Dennis and Barbara Rainey that isolation is the number-one problem in marriages today. But they believe it's possible to overcome "marital drift" and experience the miracle of oneness. This book provides a positive, workable strategy for keeping your marriage vital and intimate. Included are proven principles and hands-on exercises to help you:

Dennis Rainey is the executive director and co-founder of FamilyLife and co-hosts the radio program, FamilyLife Today. He is senior editor of the HomeBuilders Couples Series, which has sold more than 1 million copies worldwide, and author ofParenting Today's Adolescent and The Tribute.

▼▲
Dennis and Barbara Rainey are the cofounders of FamilyLife™ and frequent speakers at FamilyLife's "Weekend to Remember" and "Rekindling the Romance" arena events. Dennis is also the President of FamilyLife and the host of the radio program, FamilyLife Today. He is also the creator of the HomeBuilders Couples Series®. Dennis and Barbara have coauthored several best-selling books, including Building Your Mate's Self-Esteem and Moments Together for Couples. They have six children, one son-in-law, two daughters-in-law, and five grandchildren. They live near Little Rock, Arkansas.

▼▲
I'm the author/artist and I want to review Staying Close: Stopping the Natural Drift Toward Isolation in Marriage.
Back
Back