Skip to main content
The Year of Living Biblically
By: A.J. Jacobs
Stock No: WW291484 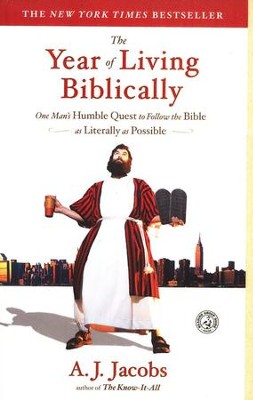 The Year of Living Biblically

▼▲
In The Year of Living Biblically A.J. Jacobs decides to dive headfirst in to an attempt to obey the Bible as literally as possible for one full year. He vows to follow the Ten Commandments. The resulting spiritual journey is at once funny and profound, reverent and irreverent, personal and universal and will make you see history's most influential book with new eyes.

From the New York Times bestselling author of The Know-It-All comes a fascinating and timely exploration of religion and the Bible. A.J. Jacobs chronicles his hilarious and thoughtful year spent obeying―as literally as possible―the tenets of the Bible.

Raised in a secular family but increasingly interested in the relevance of faith in our modern world, A.J. Jacobs decides to dive in headfirst and attempt to obey the Bible as literally as possible for one full year. He vows to follow the Ten Commandments. To be fruitful and multiply. To love his neighbor. But also to obey the hundreds of less publicized rules: to avoid wearing clothes made of mixed fibers; to play a ten-string harp; to stone adulterers.

The resulting spiritual journey is at once funny and profound, reverent and irreverent, personal and universal and will make you see history’s most influential book with new eyes.

Jacobs’s quest transforms his life even more radically than the year spent reading the entire Encyclopedia Britannica for The Know-It-All. His beard grows so unruly that he is regularly mistaken for a member of ZZ Top. He immerses himself in prayer, tends sheep in the Israeli desert, battles idolatry, and tells the absolute truth in all situations—much to his wife’s chagrin.

Throughout the book, Jacobs also embeds himself in a cross-section of communities that take the Bible literally. He tours a Kentucky-based creationist museum and sings hymns with Pennsylvania Amish. He dances with Hasidic Jews in Brooklyn and does Scripture study with Jehovah’s Witnesses. He discovers ancient biblical wisdom of startling relevance. And he wrestles with seemingly archaic rules that baffle the twenty-first-century brain.

Jacobs’s extraordinary undertaking yields unexpected epiphanies and challenges. A book that will charm readers both secular and religious, The Year of Living Biblically is part Cliff Notes to the Bible, part memoir, and part look into worlds unimaginable. Thou shalt not be able to put it down.

▼▲
A.J. Jacobs is the author of Thanks a Thousand, It’s All Relative, Drop Dead Healthy, and the New York Times bestsellers The Know-It-All, The Year of Living Biblically, and My Life as an Experiment. He is a contributor to NPR, and has written for The New York Times, The Washington Post, and Entertainment Weekly. He lives in New York City with his wife and kids. Visit him at AJJacobs.com and follow him on Twitter @ajjacobs.

▼▲
"A.J. Jacobs is so funny he can make watching his beard grow hilarious. The Year of Living Biblically is the most unexpectedly delightful - and consistently charming - book I've read in a long time. It will have you laughing out loud, nodding in disbelief, and rethinking what you believe about the Bible. It will also have you tallying your sins: I coveted his humor and envied his facial hair. And that's no lie."–Bruce Feiler, author of Walking the Bible and Where God Was Born
"A.J. Jacobs has written a - how else to put it? - Good Book. Let me take my review from the original, Psalm 2, verse 4: 'He that sitteth in the heavens shall laugh.' And let me suggest that readers, whether they know their Bible or not, get to know A.J. Jacobs. But not in a biblical sense, please."–P.J. O'Rourke
"Impressive and often tremendously amusing.... The author's determination despite constant complications from his modern secular life (wife, job, family, NYC) underscores both the absurdity of his plight and its profundity. While debunking biblical literalism -- with dinner party-ready scriptural quotes -- Jacobs simultaneously finds his spirituality renewed. ...A biblical travelogue -- and far funnier than your standard King James."–Kirkus Reviews
"The Year of Living Biblically is an extremely compelling book, appropriately irreverent and highly entertaining. More significantly, it is a tale of an intense and intelligent spiritual search that will speak powerfully and instructively to a generation of seekers."–Rabbi David Ellenson, president of Hebrew Union College
"In the twenty-first century few, if any, Christians truly attempt to follow the Bible in its literal entirety, even us evangelicals. In this yearlong experiment A.J. Jacobs attempts just that, with disarming sincere, refreshingly humorous, and unexpectedly insightful results. I commend this inspired narrative to anyone actively exploring the continued relevance of biblical living, religion's need for critical self-reflection, and the timelessness of authentic faith."–Reverend Jim Wallis, author of God's Politics and president of Sojourners/Call to Renewal
"A. J. Jacobs has written about the Bible in a manner that is brilliantly funny but unerringly respectful, learned but goofy, deeply personal yet highly relevant. I am covetous and wish him smited."–Mary Roach, Bestselling author of Spook and Stiff
"A book that is at one and the same time delightfully readable and profoundly memorable is a wonder! The Year of Living Biblically is exactly that. A. J. Jacobs has perceived the distinction between the wisdom of the Bible and its absurdities. It is a shame that so many of both our clergy and our politicians seem incapable of making that distinction."–John Shelby Spong, author of Jesus for the Non-Religious and former Episcopal bishop
"As a man incapable of developing any facial hair aside from a really amazingly cruddy moustache, I would have bought this book for the astonishing big beard chronicle alone. That The Year of Living Biblically grows, beardlike, into a long, hilarious, tangled, and ultimately moving story of spiritual growth is all the more astonishing. But why should I continue to be surprised at what springs from A. J.'s head? He is a brilliantly hilarious writer who truly lives up to that oft-misused adverb/adjective combination and then some. Plus: HE IS GOING TO HEAVEN. So how can you not afford to tithe your salary to his cause and buy this book?"–John Hodgman, Daily Show correspondent and author of Areas of My Expertise
"Seeing that most people violate at least three of the ten commandments on their way to work -- even people who work from home -- says a lot about the scale of A. J.'s feat. The fact that you need to buy six copies of this book to unlock the code to save all humanity...well, that's just pure genius."–Ben Karlin, cocreator of The Colbert Report and coauthor of America: The Book
"Setting out to explore the consequences of strict adherence to biblical laws, A. J. Jacobs encounters a series of experiences that are as hilarious as they are thought-provoking. Along the way he teaches us both the fallacies of modern day religious fundamentalism and the joys of discovering the transcendent and timeless truths of faith."–Francis S. Collins, M.D., Ph.D., director, Human Genome Project, author of The Language of God: A Scientist Presents Evidence for Belief
"Throughout his journey, Jacobs comes across as a generous and thoughtful (and yes, slightly neurotic) participant observer, lacing his story with absurdly funny cultural commentary as well as nuanced insights into the impossible task of biblical literalism."–Publishers Weekly (starred review)

▼▲
I'm the author/artist and I want to review The Year of Living Biblically.
Back
Back