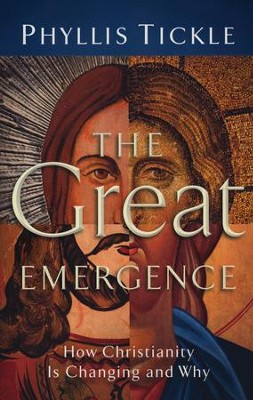 The Great Emergence: How Christianity Is Changing and Why

▼▲
Rooted in the observation that massive transitions in the church happen about every 500 years, Phyllis Tickle's The Great Emergence shows readers that we live in such a time right now. She compares the Great Emergence to other "Greats" in the history of Christianity, including the Great Transformation (when God walked among us), the time of Gregory the Great, the Great Schism, and the Great Reformation.

Combining history, a look at the causes of social upheaval, and current events, The Great Emergence shows readers what the Great Emergence in church and culture is, how it came to be, and where it is going. Anyone who is interested in the future of the church in America, no matter what their personal affiliation, will find this book a fascinating exploration.

▼▲
Rooted in the observation that massive transitions in the church happen about every 500 years, Phyllis Tickle shows readers that we live in such a time right now. She compares the Great Emergence to other "Greats" in the history of Christianity, including the Great Transformation (when God walked among us), the time of Gregory the Great, the Great Schism, and the Great Reformation.
Combining history, a look at the causes of social upheaval, and current events, The Great Emergence shows readers what the Great Emergence in church and culture is, how it came to be, and where it is going. Anyone who is interested in the future of the church in America, no matter what their personal affiliation, will find this book a fascinating exploration.
Study guide by Danielle Shroyer.

▼▲
Phyllis Tickle, founding editor of the religion department at Publishers Weekly, is one of the most highly respected authorities and popular speakers on religion in America today. She is the author of more than two dozen books on the subject, including the recently published The Words of Jesus: A Gospel of the Sayings of Our Lord and The Divine Hours, a series of manuals for observing fixed-hour prayer. She is frequently quoted and interviewed in such media outlets as The New York Times, USA Today, Newsweek, Time, CNN, C-SPAN, and PBS. A lector and lay eucharistic minister in the Episcopal Church, Tickle is a senior fellow of the Cathedral College of Washington National Cathedral. She makes her home on a small farm in Lucy, Tennessee. For more in formation, go to www.phyllistickle.com or www.thegreatemergence.com.

▼▲
Phyllis Tickle offers a creative and provocative overview of multiple social and cultural changes in our era, their relation to previous major paradigm shifts, and their particular impact on North American Christianity. This is an immensely important contribution to the current conversation about new and emerging forms of Christianity in a postmodern environment--and a delight to read!
-The Most Reverend Katharine Jefferts Schori,
Presiding Bishop and Primate, The Episcopal Church

It is too easy to call the emerging movement a new reformation. Why? Find parallels to the sixteenth century, and you've got it. It is just as easy to debunk such a theory. Why? Find absences to the Reformation, and the parallel breaks down. That is why the emerging movement has to be explained as its own thing. Phyllis Tickle does just that. One thing I've learned to appreciate as I've grown older is big theories--and that is what Phyllis gives us. Within a few pages you'll be wondering if she's onto something. If she is, then we're in the eye of a storm.
-Scot McKnight, Karl A. Olsson Professor in Religious Studies, North Park University

The Great Emergence offers a sweeping overview of church history and locates us in a moment of great opportunity and challenge. To some, this analysis will come as a rude awakening, and to others, as a dream coming true. My hunch is that this will be one of the most important books of the year, and will shape the conversation among a wide range of Christians for years to come.
-Brian McLaren, author/activist (brianmclaren.net)

Like the wise prophet Eli, Phyllis Tickle has an unparalleled ability to explain the whispers and movements of God to the rest of us. Without exaggeration, I say this book is a masterwork, and it will be cited for decades to come as the most pointed articulation of the church and Christianity that is emerging from the compost of Christendom. I don't know which I admire more: Tickle's erudition, her brilliant writing, or her faithfulness.
-Tony Jones, national coordinator, Emergent Village; author, The New Christians

"Phyllis Tickle weaves a story of change in the wider culture and church that she terms 'the Great Emergence.' She argues that this change is huge. It's one of those changes that only happens every 500 years or so and causes the structures of society to crumble and be reborn. I found her story of societal change original and compelling. As someone who has lived and breathed on the inside of this emergence in the church, advocating and encouraging change at the centre and the edge, to have someone like Phyllis so utterly convinced of the enormity of the change and the newness that is emerging is amazing. It's a hopeful and challenging wake-up call both to the inherited and emerging church.
-Jonny Baker, coauthor, Alternative Worship

I cannot speak highly enough of this new book by Phyllis Tickle. Astonishing in its panoramic scope, cultural insight and lucid brevity, The Great Emergence pinpoints the global emerging church movement within the greater drama of Christianity in a new world. Finding her bearings from previous revolutions and locating our present upheaval within the rhythms of human history, Tickle shows us why The Great Emergence will not die away but will instead inaugurate and define the next epoch of Christianity. This book will raise eyebrows and expectations.
-Andrew Jones,
Mission Consultant, tallskinnykiwi.com

Once in a great while, a book comes along and makes things make sense. With understated humility, The Great Emergence unpacks the chaos of contemporary cultural upheaval and the religious consequences of the changes we now face. Tickle acts as a compassionate guide through the Christian past and toward its future, all the while opening the spiritual imagination to unexpected hopeful possibilities. After reading these pages, neither the church nor the world looks the same.
-Diana Butler Bass,
author, Christianity for the Rest of Us: How the Neighborhood Church Is Transforming the Faith

North American Christianity is presently undergoing a change every bit as radical as the Protestant Reformation, possibly even as monumental as its natal break with Judaism. And it's right on schedule. Tickle...observes that Christianity is holding its semi-millennial rummage sale of ideas. With an elegance of argument and economy of description, Tickle escorts readers through the centuries of church history leading to this moment and persuasively charts the character of and possibilities for the emerging church. Don't let this book's brevity fool you. It is packed with keen insights about what this 'great emergence' is, how it came to be, and where it may be headed. Tickle issues a clear call to acknowledge the inevitability of change, discern the church's new shape, and participate responsibly in the transformation...This is a must-read for anyone seeking to understand the face and future of Christianity.
-Publishers Weekly (starred review)

Long an astute observer of religion, Tickle examines a phenomenon she refers to as the Great Emergence, a once-every-500-years trend within Christianity, in which a new and 'more vital' form of the religion emerges...Diverse strands come together in a seamless fabric that, at fewer than 200 pages, is small but full of big ideas, a remarkable achievement of synthesis and thoughtful reflections.
June Sawyers,
Booklist (starred review)

▼▲
I'm the author/artist and I want to review The Great Emergence: How Christianity Is Changing and Why.
Back
Back