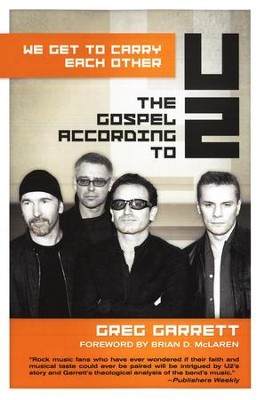 We Get to Carry Each Other: The Gospel According to U2

▼▲
Who among us has not experienced hearing a song that moved us deeply, that spoke to us in a truly spiritual way? Millions of fans around the world have found that inspiration in the music of U2, arguably the biggest band in the world today. Now, on the heels of their latest studio album No Line on the Horizon, comes this engaging and informative examination of the spirituality that drives the band and its music.

The author, who as a teen interviewed the fledgling band on their first U.S. tour, takes us from their upbringing in war-torn Northern Ireland, to their dominance over the music scene in the early 1990s, and then to their role as spiritual ambassadors to post-9/11 America. Throughout we get a picture of the spirituality that flows out of U2's music and how their influence has spread beyond music into issues such as AIDS activism, debt relief for developing nations, and the crisis in Darfur.

Who among us has not experienced hearing a song that moved us deeply, that spoke to us in a truly spiritual way? Millions of fans around the world have found that inspiration in the music of U2, arguably the biggest band in the world today. This engaging and informative book examines the spirituality that drives U2, a band whose influence has spread far beyond music and whose songs encourage listeners to put their faith into action for the sake of the poor and marginalized.

▼▲
Greg Garrett is the author of We Get to Carry Each Other: The Gospel according to U2; The Gospel according to Hollywood; Holy Superheroes! Revised and Expanded Edition: Exploring the Sacred in Comics, Graphic Novels, and Film; and Stories from the Edge: A Theology of Grief. He is a novelist, a professor of English at Baylor University, the writer-inresidence at the Episcopal Seminary of the Southwest, and a licensed lay preacher in the Episcopal Church.

▼▲
There are a lot of reasons to listen to music, but one of the best is that a good song is like a portal into a whole realm of human experience. When I finished Gregs book, I imagined groups of people using it to organize listening parties. Greg references a great U2 song at the beginning of each chapter, along with some worthwhile things to ponder, and participants can pull up lyrics online and go through portal after portal to think and talk about things that really matter. I think U2 would be glad to know that sort of thing was happening through their songs.  from the foreword by Brian D. McLaren

▼▲
U2 may be the most popular rock band in the world, but unlike the Beatles' John Lennon, they never claimed to be bigger than Jesus. The band does, however, engage several Christian themes in its music. Garrett, an English professor at Baylor University, plumbs the U2 catalogue to reveal the group's theological worldview. This is not a far stretchthree of the four band members were involved with a charismatic Christian community in Ireland as the group was starting out. U2 is not the only rock band to address spiritual themes in its music, but as the author adeptly illustrates, it has certainly been one of the most consistent and outspoken. Garrett rightly posits in a chapter about social justice that U2's message encourages listeners to put their faith into action for the sake of the poor and marginalized. The author is clearly a music fan, and his excitement about U2 is contagious. Rock music fans who have ever wondered if their faith and musical taste could ever be paired will be intrigued by U2's story and Garrett's theological analysis of the band's music. (July) Copyright 2009 Reed Business Information.

Tell us a little about yourself.  I'm a writer, teacher, preacher, musician, and father.

What was your motivation behind this project?   I've been listening to U2 since the early 1980s and interviewed them early in their career. U2's music and their work for peace and justice has been a huge part of my own spiritual journey, and I wanted to examine their work theologically so people could learn from it.

What do you hope folks will gain from this project?  I'd like for readers of the book to recognize, first, that God speaks to us in many ways, and that U2's music has been a powerful influence even on those outside the Church. I also hope they might recognize how we are called to be in community, and to work together for the Kingdom of God.

How were you personally impacted by working on this project?  Well, I listened to U2 for two years as I was thinking about and writing the book. But mostly I was inspired by their songs and their example. I finished the project more impressed by them than when I'd begun.

Who are your influences, sources of inspiration or favorite authors / artists?  For this book, I'm going to stick with U2.

Anything else you'd like readers / listeners to know:  I think U2's new album, No Line on the Horizon, is one of their most overtly Christian. And I explain why in the book.