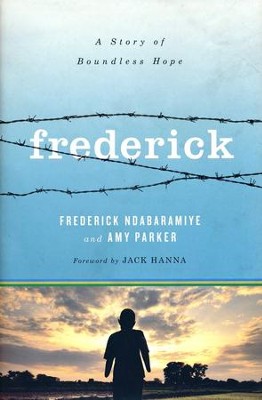 Frederick: A Story of Boundless Hope

▼▲
"My God won't let me do that." In 1994 Rwanda, young Frederick Ndabaramiye knew these bold words would likely be his last. But when he refused to kill innocent civilians on a bus, the cords of God's love bound him---serving as a tourniquet that saved his life even as his hands were severed. A gripping testimony! 240 pages, hardcover from Nelson.

These seven words of boundless hope would irreversibly change the life of the teenage boy who spoke them.

On April 7, 1994 the life of Frederick Ndabaramiye and his family changed forever as the Rwandan genocide erupted in their homeland. When Frederick faced those same genocidaires a few years later, he noted the machete that hung from the right hand closest to him and wondered if his would soon be added to the layers of dried blood that clung to the blade. Either way, young Frederick knew that he wouldn’t be able to carry out the orders just given to him, to raise that blade against the other passengers of the bus, regardless of the race marked on their identity cards.

That bold decision would cause Frederick to lose his hands. But what the killers meant for harm, God intended for good. The cords that bound him served as a tourniquet, saving his life when his hands were hacked away. This new disability eventually fueled Frederick’s passion to show the world that disabilities do not have to stop you from living a life of undeniable purpose. From that passion, the Ubumwe Community Center was born, where "people like me" come to discover their own purposes and abilities despite their circumstances.

Through miraculous mercy and divine appointment, Frederick forgives those who harmed him and goes on to fully grasp his God-given mission. In this extraordinary true story of forgiveness, faith, and hope, you will be challenged, convicted, and forever converted to a believer of the impossible.

▼▲
I'm the author/artist and I want to review Frederick: A Story of Boundless Hope.
Back
×
Back
×