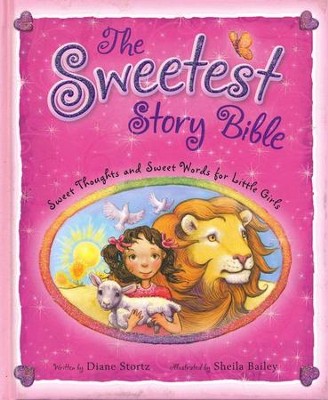 By: Diane Stortz
ZonderKidz / 2010 / Hardcover
5 out of 5 stars for Sweetest Story Bible: Sweet Thoughts and Sweet Words For Little Girls (7 Reviews) Write a Review
In Stock
Stock No: WW716731

▼▲
The sweetest things surround your little girl's life: hearts and flowers, kittens and puppies, umbrellas and tea parties, kisses and hugs. But the sweetest thing of all in her life is God's love.

The Sweetest Story Bible includes forty carefully selected Bible stories that show how much God loves his people and your little girl. Sweet thoughts to think about and easy Scripture verses to remember are included with each story to connect a little girl's life to God's Word. This storybook Bible will help her see just how wonderful God's love really is.

The Sweetest Story Bible includes 40 carefully selected Bible stories to show just how much God loves your little girl. Featuring beautiful pictures and lots of stories usually not included in other children's Bibles, this storybook Bible is a perfect way to introduce God’s Word to your sweet little daughter, granddaughter, or niece.

With just the right amount of pink and sparkles, The Sweetest Story Bible will quickly become one of your little girl’s favorite all time books, and your go-to gift to give any special little girl in your life.

Diane M. Stortz is an author and former editorial director whose heart’s desire is to "tell the next generation about the glorious deeds of the Lord" (Psalm 78:4). Diane’s books include Words to Dream On, The Sweetest Story Bible, I Am, I Am Devotional, Say & Pray Bible, Say & Pray Devotions, and A Woman’s Guide to Reading the Bible in a Year. Diane and her husband reside in Cincinnati, Ohio, and have two married daughters. Diane enjoys walking, gardening, and visiting her four young grandsons.

Sheila Bailey works in watercolor and digital media. In fact, it is this combination of tools that allows her to achieve her characteristic style. Sheila began her career as a designer and painter for Hallmark, Inc. Later, she became a featured designer at Will Vinton Studios. Formerly published under the name Sheila Lucas, Sheila Bailey has been writing and illustrating children's literature for more than a decade. Away from her brush, Sheila enjoys gardening and tending to her koi pond. She currently lives in Oregon.

▼▲
I'm the author/artist and I want to review Sweetest Story Bible: Sweet Thoughts and Sweet Words For Little Girls.
Back
×
Back
×