EASTER SEASON SALE: Over 1,100 deals up to 75% off. Shop through March 30th. >
Come, Thou Long-Expected Jesus: Experiencing the Peace and Promise of Christmas
Edited By: Nancy Guthrie
By: Edited by Nancy Guthrie 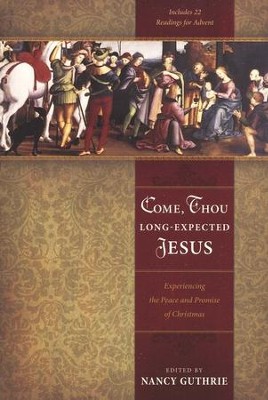 Come, Thou Long-Expected Jesus: Experiencing the Peace and Promise of Christmas

▼▲
For many people, Advent means wearying weeks of purchasing, planning, pageants, and parties. But you prefer a season of peaceful anticipation and Guthrie's solidly biblical collection of 22 essays will help. Featuring writings by Augustine, Luther, Edwards, Spurgeon, Piper, John MacArthur, and other excellent writers.

An Anthology of Advent readings, collected from the works of 22 classic and contemporary theologians with a high view of Scripture, it will help in preparing your heart to honor the sacredness of each Christmas season.

Nancy Guthrie teaches the Bible to women at her church, Cornerstone Presbyterian Church in Franklin, Tennessee, and at conferences worldwide. She and her husband, David, are the cohosts of the GriefShare video series used in more than 10,000 churches nationwide and also host Respite Retreats for couples who have experienced the death of a child. Guthrie is also the host of Help Me Teach the Bible, a podcast from the Gospel Coalition.

Francis A. Schaeffer (1912–1984) authored more than twenty books, which have been translated into a score of languages and sold millions worldwide. He and his wife, Edith, founded L'Abri Fellowship international study and discipleship centers. Recognized internationally for his work in Christianity and culture, Schaeffer passed away in 1984 but his influence and legacy continue worldwide.

Jonathan Edwards (1703–1758) was a pastor, theologian, and missionary. He is generally considered the greatest American theologian. A prolific writer, Edwards is known for his many sermons, including "Sinners in the Hands of an Angry God", and his classic Treatise Concerning Religious Affections. Edwards was appointed president of the College of New Jersey (later renamed Princeton University) shortly before his death.

J. I. Packer (DPhil, Oxford University) serves as the Board of Governors’ Professor of Theology at Regent College. He is the author of numerous books, including the classic best-seller Knowing God. Packer served as general editor for the English Standard Version Bible and as theological editor for the ESV Study Bible.

Raymond C. Ortlund Jr. is the pastor to pastors at Immanuel Church in Nashville, Tennessee. He is the author of several books, including the Preaching the Word commentary on Isaiah and Marriage and the Mystery of the Gospel, as well as a contributor to the ESV Study Bible. He and his wife, Jani, have four children.

J. C. RYLE (1816–1900) was a prominent writer, preacher, and Anglican clergyman in nineteenth-century Britain. He is the author of the classic Expository Thoughts on the Gospels and retired as the bishop of Liverpool.

▼▲
Nancy Guthrie has a passion for sharing Gods Word through her growing national and international Bible-teaching ministry. She has worked in the Christian publishing industry for more than two decades and is the author of Holding On to Hope, The One-Year Book of Hope, and Hoping for Something Better.

▼▲
Editor Nancy Guthrie wanted more than vague inspiration and interesting anecdotes when she began her search for an Advent anthology. She wanted a reflective book of Advent readings that would help her to pause---amid the purchasing of presents, attending of parties, and planning of travel---and consider the riches of Christ come to earth.

Guthrie sought a book that brought together the best pieces by trusted authors and pastors who hold a high view of Scripture and who would show her the incarnation in the context of Gods unfolding plan of redemption. So when she could not find such a book in the vast Christian marketplace, she embarked on what she calls a sacred adventure and compiled it herself.

Come, Thou Long-Expected Jesus is an anthology of Advent readings collected from the writings and sermons of 22 classic and contemporary theologians and Bible teachers. This special volume draws from the works and sermons of classic theologians such as Whitefield, Luther, Spurgeon, and Augustine and from leading contemporary communicators such as Tim Keller, John Piper, Ligon Duncan, Randy Alcorn, John MacArthur, Francis Schaeffer, R. C. Sproul, and Joni Eareckson Tada to help readers enter into the wonder of Jesus incarnation and birth.

Each essay in this solidly biblical anthology expounds on a particular aspect of the Christmas story and includes the appropriate Scripture passage from the ESV Bible. Come, Thou Long-Expected Jesus is sure to awaken your heart to a fresh experience of the coming of Jesus each and every Christmas season.

▼▲
I'm the author/artist and I want to review Come, Thou Long-Expected Jesus: Experiencing the Peace and Promise of Christmas.
Back
×
Back
×