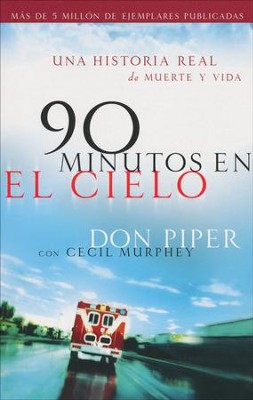 After a devastating car accident, Baptist minister Don Piper is pronounced dead at the scene. During the next 90 minutes, he remembers hearing beautiful music, meeting those who had a spiritual impact in his life, and experiences deep peace--until suddenly he is brought back to "real life" through another minister's prayer in this amazing true story.

▼▲
Now available in a mass market Spanish language edition, 90 minutos en el cielo is the runaway bestseller about one man's experience with death and life. As Baptist minister Don Piper drove home from a conference, his car collided with a semi-truck that had crossed into his lane. Piper was pronounced dead at the scene. For the next ninety minutes, he experienced the glories of heaven. Miraculously, Piper came back to life, and the pleasure of heaven was replaced by a long and painful recovery.

An inspiring and encouraging account, 90 Minutes in Heaven continues to touch and comfort millions of people around the world as it offers a glimpse of inexpressible heavenly bliss.

▼▲
I'm the author/artist and I want to review 90 Minutos en el Cielo (90 Minutes in Heaven).
Back
Back