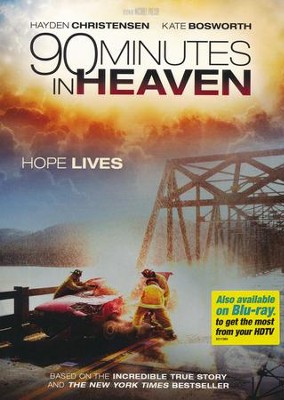 Based on the New York Times best selling book of the same name. When a semi-truck crushed pastor Don Piper's car on January 18, 1989, he was killed instantly. The first rescue workers to arrive on the scene confirmed him dead, and Don's body laid under a tarp for the 90 minutes following. His soul though, was experiencing love, joy, and life like he'd never known before. Don was in Heaven.

Through the prayers of another pastor, Don was brought back to life, and he became a living miracle. For Don though, this was a miracle he wish hadn't happened. Replacing Heaven's bliss was excruciating pain and emotional turmoil. With continued prayers and support by his family and friends, both near and far, Don held onto his faith in God and fought to regain a semblance of his previous life. Rated PG-13. Approx. 2 hours.

▼▲
I'm the author/artist and I want to review 90 Minutes in Heaven, DVD.
Back
Back