#9: Mysteries According to Humphrey
By: Betty G. Birney 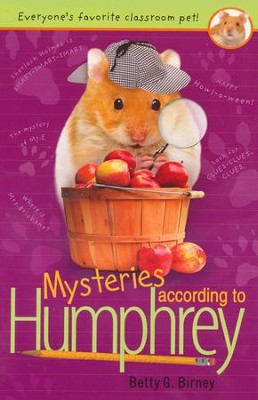 #9: Mysteries According to Humphrey

By: Betty G. Birney
More in According to Humphrey Series
Puffin Books / 2013 / Paperback
Write a Review
In Stock
Stock No: WW426692

▼▲
It's fall and everyone in Room 26 is excited that Halloween is coming, but this year something even more fur-raising is going on---Mrs. Brisbane is missing! She's stopped coming to school and Humphrey has no idea where she is. Luckily, Humphrey has just learned about an smart detective named Sherlock Holmes, who is great at collecting clues and following leads---just what Humphrey will have to do to solve the case!

Humphrey has always investigated things, like why Speak-Up-Sayeh was so quiet and Tall-Paul and Small-Paul didn't get along, but this is a true mystery--Mrs. Brisbane is missing! She just didn't show up in Room 26 one morning and no one told Humphrey why. The class has a substitute teacher, called Mr. E., but he's no Mrs. Brisbane. Humphrey has just learned about Sherlock Holmes, so he vows to be just as SMART-SMART-SMART about collecting clues and following leads to solve the mystery of Mrs. Brisbane (and a few others along the way).

Nominated for twenty-four state awards and the winner of seven, the Humphrey series is a hit across the country.

The World According to Humphrey

▼▲
I'm the author/artist and I want to review #9: Mysteries According to Humphrey.
Back
×
Back
×