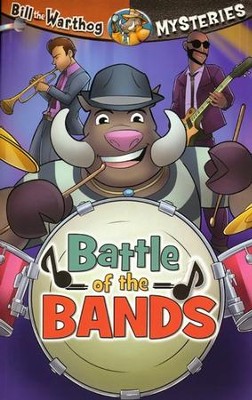 ▼▲
Bill the Warthog is the only warthog in town that can play the drums and he is good. When a music producer comes to town and tries to sign Bill, Bill realizes that he and the producer do not share the same values. So Bill decides to join the neighborhood band just as they are entering a big contest, but someone is trying to sabotage the contest! Can Bill the Warthog and his friends figure out who is causing all the trouble so the show can go on? A fun story with each chapter featuring a different Psalm that provides clues to each mystery.

Solve and unravel kid-sized crimes and mind-bending mysteries packed with truth and humor! Perfect for elementary to preteens. 112 pages.

Bring out your inner super-sleuth with Bill the Warthog in Battle of the Bands, the ninth book in this exciting mystery series! Crack open 10 different creative cases while exploring important Bible lessons in each edge-of-your-seat book!

In Battle of the Bands, Nick and Bill have formed a musical band with their friends, but it appears that someone is trying to sabotage their act! Rock out with Bill and Nick as you encounter crooked music agents, get to play on the radio, and compete in the Elm Street Battle of the Bands! But who is sabotaging the band's efforts and trying to bribe band members into ruining the contest? It's up to you and Bill to solve this high-voltage whodunit in The Battle of the Bands with clues from the Book of Psalms!

"The mysteries in this book are great, and not only that, they are packed with truth and humor. I recommend the 'Bill the Warthog' series to parents looking for good books to read to their children, as well as, to independent elementary school to early middle school readers. They're simply fabulous!" —Jill, Amazon Review

Meet Bill the Warthog, the best (and only) warthog detective in the world! He's not your average warthog: he wears dress shoes on his hind feet, dress pants, a pressed white shirt, tie, and a long trench coat. Oh, and did we mention he always wears a fedora hat? With a great nose for mysteries (and delicious bugs!), not a lot gets past Bill, but it's OK: he's one of the good guys! Join Bill on his quest to solve persnickety puzzles, crush kid-sized crimes, and thwart threatening thieves.

Preview of Battle of the Bands

▼▲
I'm the author/artist and I want to review #9: Battle of the Bands.
Back
Back