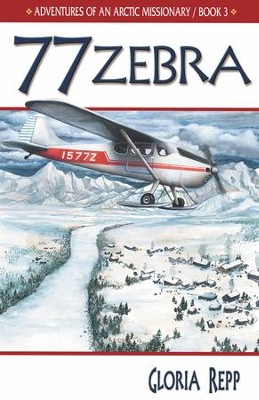 ▼▲
Gloria Repp concludes the Christian fiction story of missionaries Steve and Liz Bailey in 77 Zebra. Leaning on the Lord’s promises, Steve and Liz touch down once again in Alaskan wilderness. With their new high-flying helper, a Cessna 170 airplane, the missionaries are eager to bring God’s Word to troubled villagers. But drunkenness and fear are not the only problems they find. A life-threatening emergency raises serious questions about a fellow pilot. Then Steve’s greatest hope becomes his greatest struggle when he and young Charlie become trapped in a brutal storm. 77 Zebra is Book 3 in the Adventures of an Arctic Missionary Series written for middle-grade readers.