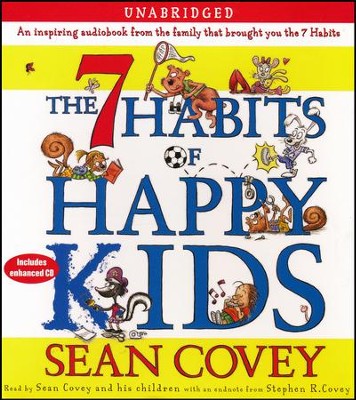 ▼▲
This inspiring book for children ages 4 to 8 shows youngsters how to practice the 7 habits taught by Sean Covey. In the town of Seven Oaks, friends Goob Bear, Jumper Rabbit, Lily Skunk, twins Sammy and Squirrel, Pokey Porcupine, Tagalong Allie, and Ernie the worm have lots of fun singing, jumping, playing harmonicas, drawing, and lots of other fun games. The 7 Habits of Happy Kids tells seven stories that show how practicing the 7 habits lets them all be happy. Illustrated by Stacy Curtis. For children ages 4 to 8.

▼▲
In The 7 Habits of Happy Kids, Sean Covey uses beautifully illustrated stories to bring his family's successful philosophy to the youngest child.

For the Seven Oaks friends, there is always something to do. Whether they're singing along with Pokey Porcupine's harmonica or playing soccer with Jumper Rabbit, everyone is having fun and learning all sorts of things. These seven stories show how practicing the 7 Habits makes this possible for the whole Seven Oaks Community.

From learning how to take charge of their own lives to discovering how balance is best, the Seven Oaks friends have tons of adventures and find out how each and every kid can be a happy kid!

▼▲
Sean Covey is the President of FranklinCovey Education and the original architect of the 4 Disciplines methodology. A Harvard MBA and former Brigham Young University quarterback, Sean is also a New York Times bestselling author and has written numerous books, including The Leader in Me and The 7 Habits of Highly Effective Teens.

Recognized as one of Time magazine’s twenty-five most influential Americans, Stephen R. Covey (1932–2012) was an internationally respected leadership authority, family expert, teacher, organizational consultant, and author. His books have sold more than twenty-five million copies in thirty-eight languages, and The 7 Habits of Highly Effective People was named the #1 Most Influential Business Book of the Twentieth Century. After receiving an MBA from Harvard and a doctorate degree from Brigham Young University, he became the cofounder and vice chairman of FranklinCovey, a leading global training firm.

▼▲
I'm the author/artist and I want to review 7 Habits of Happy Kids, Audio CD.
Back
Back