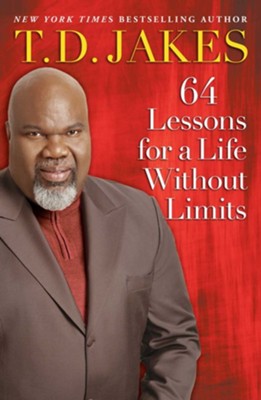 64 Lessons for a Life Without Limits

You’ve made adjustments and the important choices toward a better life, but now it’s time to stand firm. This moving and remarkable treasure of a book is divided into eight sections, each of which includes eight pieces of unforgettable advice. These all add up to 64 Lessons for a Life Without Limits, the perfect inspirational tool for keeping you grounded with confidence and maximizing your potential. "We can always count on a word from God through Bishop Jakes that will not only inspire us but will speak growth to our souls" (Tyler Perry).

▼▲
T.D. Jakes is the CEO of TDJ Enterprises, LLP, as well as the founder and senior pastor of The Potter’s House of Dallas, Inc. He’s also the New York Times bestselling author of numerous books, including, Crushing, Soar!, Making Great Decisions (previously titled Before You Do), Reposition Yourself: Living Life Without Limits, and Let It Go: Forgive So You Can Be Forgiven, a New York Times, USA TODAY, and Publishers Weekly bestseller. He has won and been nominated for numerous awards, including Essence magazine’s President’s Award in 2007 for Reposition Yourself, a Grammy in 2004, and NAACP Image awards. He has been the host of national radio and television broadcasts, was the star of BET’s Mind, Body and Soul, and is regularly featured on the highly rated Dr. Phil Show and Oprah’s Lifeclass. He lives in Dallas with his wife and five children. Visit T.D. Jakes online at TDJakes.com or follow his Twitter @BishopJakes.

▼▲
I'm the author/artist and I want to review 64 Lessons for a Life Without Limits.
Back