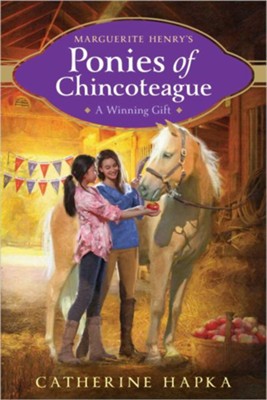 By: Catherine Hapka, Robert Papp
More in Marguerite Henry's Ponies of Chincoteague Series
Aladdin / 2015 / Hardcover
Write a Review
Expected to ship on or about 08/12/20.
Stock No: WW439695

▼▲
Maddie worries she might be giving up too much—especially Cloudy, her pony—in this fifth book in a contemporary middle grade series in the tradition of Marguerite Henry’s Misty of Chincoteague.

It’s almost Maddie’s birthday, and while snooping around for her hidden gifts (a family tradition), she stumbles across something that makes her think her mother is getting transferred again by the Air Force—this time overseas! What will that mean for Maddie and her pony, Cloudy? On top of that Maddie’s best friend Bridget has just broken up with her boyfriend, and it seems that Cloudy is the only thing that makes her feel better. Why does Maddie always have to be the one who’s making sacrifices?

▼▲
Catherine Hapka has written more than 100 books for children and adults. She’s written for series as a ghostwriter and has also authored original titles. She lives in Pennsylvania.