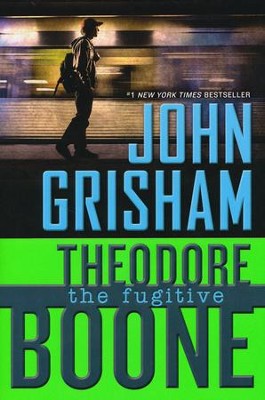 ▼▲
Theo Boone and the rest of his eighth grade class are all on a big trip in Washington D.C. Things are right on schedule until Theo sees fugitive Pete Duffy on the Metro. Theo recognizes him right away and helps the FBI to arrest him. But now Duffy knows what Theo looks like and who he is. Theo is in more danger than he has ever been in before, and he won't stop until he is sure that the killer is brought to justice. Recommended for ages 8 to 12.

▼▲
"Not since Nancy Drew has a nosy, crime-obsessed kid been so hard to resist." —The New York Times

Thirteen-year-old Theodore Boone thought the danger had passed, but he’s about to face off against an old adversary: accused mur&shy;derer and fugitive Pete Duffy.

On a field trip to Washington, DC, Theo spots a familiar face on the Metro: Duffy, who jumped bail and was never seen again. Theo’s quick thinking helps bring Duffy back to Strattenburg to stand trial. But now that Duffy knows who he is, Theo is in greater danger than he’s ever been in before. Even when every&shy;thing is on the line, Theodore Boone will stop at nothing to make sure a killer is brought to justice.

This smart, fast-paced legal thriller for young readers is the newest adventure for clever and determined kid lawyer Theo Boone.

▼▲
John Grisham is the author of twenty-seven novels, five books for young readers, one work of nonfiction, and one collection of stories. His works have been translated into over forty languages. He lives in Virginia.

▼▲
Praise for the Theodore Boone series

"Not since Nancy Drew has a nosy, crime-obsessed kid been so hard to resist." —The New York Times

"Gripping . . . I would recommend this book to anyone who loves a good mystery. I think everyone will be enthralled by Theodore Boone." —Scholastic News

▼▲
I'm the author/artist and I want to review #5: The Fugitive: Theodore Boone.
Back
Back