We are OPEN and SHIPPING - click here for shipping estimates
PRE-SUMMER CYBER SALE EXTENDED thru 6/1 ~ Over 2,500 items up to 90% off
#5: Season of Change
By: Lisa Williams Kline 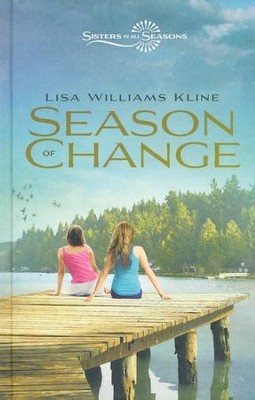 By: Lisa Williams Kline
More in Sisters In All Seasons Series
ZonderKidz / 2013 / Hardcover
Write a Review
In Stock
Stock No: WW740071

▼▲
The final book in the series shows what happens when two opposites become sisters, and eventually, unlikely friends.
Diana and Stephanie find a brochure for a marriage counseling retreat and are suspicious when they are brought to Diana's grandparent's house for a "long weekend." Things that weekend don't get any better, and Diana hits a deer when driving and Stephanie unexpectedly leaves with her mother. Are the girls forever separated?

On a long weekend with Diana’s grandparents, Stephanie and Diana face what could be their greatest fear: another divorce in their family.

Diana and Stephanie find a hidden brochure for a marriage counseling retreat in Norm and Lynn’s room, and their suspicions flare when they’re dropped off at Diana’s grandparents’ home on Lake Norman for a “long weekend.” Will there be another divorce? Things go from bad to worse when Diana hits a deer while practicing driving. Then Stephanie’s mom shows up unexpectedly, and the girls are separated. Is it for good? Isn’t that what they wanted?  As the girls wonder what it would be like to not have to put up with each other, Diana finds something in the woods, and everything changes.

This final book in the Sisters in all Seasons series brings the story of Stephanie and Diana to a close, and shows what happens when two opposites become friends, and maybe sisters.

Praise for Summer of the Wolves:

“This funny, gentle and compassionate story feels fresh, thanks to appealing, closely observed characters, both major and minor, and a compelling setting”

Lisa Williams Kline is the author of The Princesses of Atlantis, Write Before Your Eyes, and Eleanor Hill, winner of the North Carolina Juvenile Literature Award. Her stories for children have appeared in Cricket, Cicada, Spider, and Odyssey. She earned her MFA from Queens University.