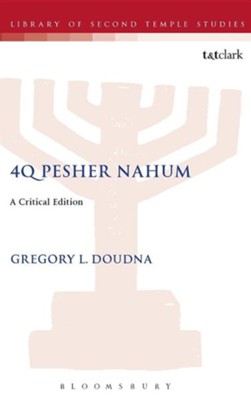 Buy Item $381.25
In Stock
Quantity:
Stock No: WW71560
Bloomsbury Academic / Hardcover
Quantity:
Add To Cart
of These in Your Cart

▼▲
4Q Pesher Nahum has long been considered one of the most important Qumran texts for understanding the historical context of the Scrolls. Doudna's comprehensive critical edition presents new readings and undertakes extensive analysis and reconstruction of broken text. Areas of focus include text-critical implications, scribal practices, and formal and composition patterns common throughout the Qumran pesharim. An outcome of this work sure to attract attention is its demonstration that the mysterious 'Lion of Wrath' figure of the text is not the Hasmonaean king Alexander Jannaeus, as almost universally held. Rather, Pesher Nahum portrays a coming conquest from the 'Kittim', and the 'Lion of Wrath' is a Nebuchadnezzar-like foreign invader coming to deliver the wrath of God on a sinful Israel. There is also an Appendix: 'Was Hyrcanus II the Teacher of Righteousness and Were the Scrolls Deposited in the Caves near Qumran in 40 bce?'>

▼▲
I'm the author/artist and I want to review 4Q Pesher Nahum.
Back
×