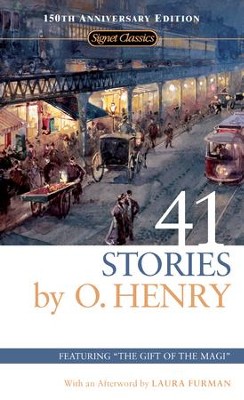 ▼▲
A master of irony and wordplay, O. Henry's short stories are filled with wit and humor. With plot turns, unexpected climaxes, and deep insights into human nature, O. Henry stories continue to touch the hearts of readers. This collection includes the classic "The Gift of the Magi". 424 pages, softcover.

▼▲
The Master of Irony

Readers the world over recognize O. Henry as the best short story writer of the early twentieth century. Widely known as a master of irony, O. Henry also displays here dazzling wordplay and a wry combination of pathos and humor.

▼▲
William Sydney Porter (1862-1910) published all of his work—a novel and some 300 short stories—under the pseudonym 0. Henry. His talent for vivid caricature, local tone, narrative agility, and compassion tempered by irony made him a vastly popular writer in the last decade of his life. He was born in Greensboro, North Carolina, to ordinary middle-class parents and worked in an uncle’s drugstore as a youth, becoming a certified pharmacist. Like many Southerners after the Civil War, he sought his fortune in the West, holding various jobs (newspaper work, clerking in a land office, a teller at an Austin bank). Charged with embezzlement in 1894, he fled to Honduras, returning in 1897 to be with his ill and dying wife. His conviction was caused more by his eluding trial than by the conflicting evidence of theft. In the Ohio State Penitentiary (1898-1901), he began to write the stories that made him famous. He moved to New York, remarried, and kept his identity a secret from all but a few friends. He is buried in Asheville, North Carolina. He is universally honored for his mastery of the short story and for his humane spirit.
Burton Raffel has taught English, Classics, and Comparative Literature at universities in the United States, Israel, and Canada. His books include translations of Beowulf, Horace: Odes, Epodes, Epistles, Satires, The Complete Poetry and Prose of Chairil Anwar, From the Vietnamese, Ten Centuries of Poetry, The Complete Poetry of Osip Emilevich, Mandelstram (with Alla Burago), and Poems From the Old English and The Annotated Milton; several critical studies, Introduction to Poetry, How to Read a Poem, The Development of Modern Indonesian Poetry, and The Forked Tounge: A Study of the Translation Process; and Mia Poems, a volume of his own poetry. Mr. Raffel practiced law on Wall Street and taught in the Ford Foundation’s English Language Teacher Training Project in Indonesia.

▼▲
I'm the author/artist and I want to review 41 Stories: 150th Anniversary Edition - eBook.
Back
Back