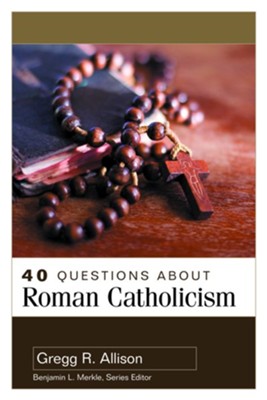 ▼▲
Straightforward answers about Roman Catholicism for a Protestant audience

The Roman Catholic faith is one of the world's most widespread religious traditions, yet the unique aspects of Roman Catholicism elicit perennial questions from adherents and outsiders alike. Such questions tend to fall into three major categories: historical backgrounds, theological matters, and personal relationships. Using Catholic Church documents and the writings of Catholic scholars, Baptist systematic theologian Gregg Allison distills the teachings of Catholicism around forty common questions about Catholic foundations, beliefs, and practices. The accessible question-and-answer format guides readers to the issues that concern them, including:
R26; Where do Roman Catholic and Protestant beliefs differ?
R26; What happens during a Roman Catholic Mass?
R26; How does Roman Catholicism understand the biblical teaching about Mary?
R26; Who are the saints and what is their role?
R26; How can my Roman Catholic loved ones and I talk about the gospel?

40 Questions About Roman Catholicism explores theology and practice, doctrine and liturgy, sacraments and Mariology, contributions and scandals, and many other things, clarifying both real and perceived differences and similarities with other Christian traditions.

▼▲
I'm the author/artist and I want to review 40 Questions About Roman Catholicism - eBook.
Back
Back