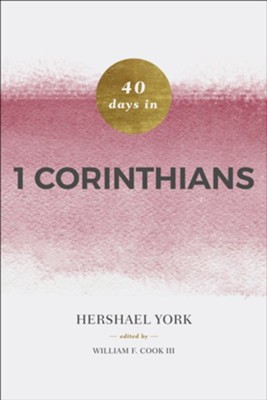 This product is part of our current Biggest Bargain Sale promotion.
Buy Item

40 Days in 1 Corinthians is part of a series of devotionals written for any Christian desiring to deepen his or her understanding of Scripture.

The Holy Spirit uses God's Word to grow believers in their faith and increase their passion for Jesus. As each volume focuses on a particular book in the Bible, believers will find the study useful for the enrichment of daily devotional reading or as the basis for small group Bible study discussion.

In this volume, readers will be lead through a daily study of 1 Corinthians. 40 Days in 1 Corinthians breaks down the book of 1 Corinthians into chunks that presents the "Big Picture" of the passage, then "Digging Deeper" into that section and then moving to help the reader into "Living Out" the lessons that are taught each day.

▼▲
Hershael York has served as the 11th dean of Southern Seminary’s School of Theology since 2018. Since coming to Southern in 1997, York has authored two books on speaking and preaching and has written dozens of articles in journals and online publications. His preaching has been featured in Preaching Today as among the best in North America and he has twice preached at the International Congress on preaching in Cambridge, England.
He currently serves as the senior pastor of Buck Run Baptist Church in Frankfort, Kentucky, where he has led the 200-year-old church in growth that necessitated relocation to a 100-acre campus and new facilities. York frequently ministers internationally, especially in Brazil, where his father was a missionary.

▼▲
I'm the author/artist and I want to review 40 Days in 1 Corinthians.
Back
Back