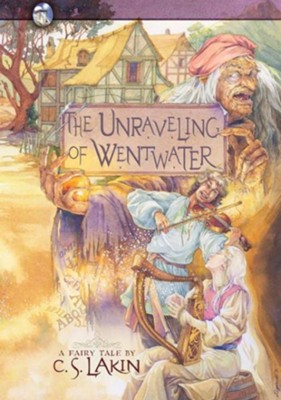 #4: The Unraveling of Wentwater - eBook

▼▲
The backward village of Wentwater is unraveling--one word at a time--and neither the wise men in the heights nor the superstitious villagers can undo the spell gone awry. Teralyn, who only wants to play her music with the young man she loves, becomes entangled in prophecy and destiny when she learns she is the one foretold to cause the undoing of Wentwater--only by stitching every word back into existence can she save everyone she loves.

▼▲
When the simple, backward village of Wentwater begins disappearing one word at a time, no one can figure out how to stop it. Not the learned men living up in the Heights nor the superstitious leaders of the village. But those who had attended the baby naming ceremony seventeen years earlier remember the words of the marsh witch, and her pronouncement that the babe would one day cause the unraveling of Wentwater. In their fear, the villagers banish the parents and set their cottage on fire, and the babe was thought to have perished in the flames. But . . . did she?

Teralyn lives in the Heights and wants nothing more than to create beautiful music on her lap harp. When she comes down to the village for a festival, she falls in love with a villager named Fromer, much to the fury of Fromer’s brother, Justyn. Justyn’s jealousy moves him to make a deal with the witch, and when Wentwater vanishes due to a backfiring spell, it leaves Teralyn, the only person left in the kingdom, with a terrible choice. She must leave her life and forget Wentwater, or she can spend seven long years restoring everything back to the way it was, by spinning nettle into thread and stitching the world back . . . one word at a time.

The Unraveling of Wentwater explores love, jealousy, mercy, and judgment. It spins a tale about the power and magic of words, and as the marsh witch, who keeps words in a jar, warns, "Be careful with your words, they have consequences!" Secrets and superstitions abound in the kingdom, but only a water creature who lives at the bottom of the lake and guards the sacred site knows the truth and can help Teralyn restore all.

In this fourth installment of The Gates of Heaven fantasy series, readers will learn of the fourth of seven sacred sites heaven set up on earth to prevent evil from gaining a stronghold over the hearts of men. Inspired by the traditional fairy tale Sleeping Beauty, readers will be taken on a journey that will leave them, in a word . . . speechless.

▼▲
Wentwater is a village ruled by superstition. It lies at the foot of the mountain where, high above, the Heights is the home and pinnacle of learning. Teralyn descends from the Heights for a village music festival, accompanied by the student Justyn, whose family lives in the village. While Justyn seeks to leave his native village behind, Teralyn, a musician, finds joy in its appreciation for music, and a kindred soul in Justyn's shepherd brother Fromer. That's only the beginning of a complex plot involving a prophecy that has to do with Teralyn and the titular unraveling--disappearance--of the village as things, and the words that signify them, begin to disappear. Lakin (The Wolf of Tebron) mixes classic fairy tale elements (witches, spinning thread from nettles, water spirits) with wisdom elements from the Bible in a highly imaginative amalgam that examines the making of meaning and the making of mercy. Lakin's clever revival of the power of fairy tales as she continues The Gates of Heaven fantasy series makes one miss them as a vehicle for instructing the young. Ages 14-up. (July) 2012 Reed Business Information

▼▲
Words are vanishing in C.S. Lakin's The Unraveling of Wentwater and only Teralyn can stop it. Long ago, the marsh witch predicted a newborn babe would cause the undoing of Wentwater before her 18th birthday, and the superstitious village of Wentwater frantically tried everything in its power to prevent it. For years they thought everything was fine, until the day Teralyn arrived.


When Teralyn, a simple girl from the Heights, gets an opportunity to travel below to Wentwater village for the annual festival, she is excited to experience a different culture and hear new music that will better her own musical expertise. Her companion Justyn feels differently. Living his entire life in the village of silly traditions has forced him to venture to the Heights in pursuit of knowledge and wisdom. Having been asked to escort Teralyn to the festival, he dreads going back to his superstitious family with parents who understand neither him nor his love and thirst for knowledge.


While in the village, Justyn shows Teralyn around and takes a liking to her; when Teralyn meets and falls in love with his younger brother, Fromer, Justyn doesn't hide his hurt and jealousy. Envious of Fromer and angry with Teralyn, he sets out to take matters into his own hands. The marsh witch says she only needs his word as payment and Justyn underestimates the power of that one word.


Before long, strange disappearances occur and the villagers become desperate for someone to blame. When they accuse Teralyn of being the one the prophecy speaks of, she strives to uncover the truth of what's happening and to do everything she can to fix it. If Teralyn is the cause, then she alone can stop the unraveling of Wentwater.

C.S. Lakin has written a unique story of love versus hate that creatively reminds the reader about the power of words. She paraphrases several Bible verses throughout her novel such as, Hebrews 1:3: "[He] sustains all things by his powerful word." She includes a list of such verses as well as a discussion with questions on the biblical themes at the end of the book. And although The Unraveling of Wentwater is the fourth book in The Gates of Heaven Series, the reader doesn't have to know the others in order to fully appreciate this one. I highly recommend this novel to anyone searching for a good story with a deeper meaning woven into it. - Kristi Schweitzer, www.ChristianBookPreviews.com

▼▲
What I love about C.S Lakin is the fact that in every story she brings the glory of God alive. We see the power of the cross and heaven's gates are revealed in such a way that the story comes to life. The characters in the latest installment of, "The Gates Of Heaven Series", she brings us to Wentwater.

I love how Lakin takes words and shows the power they have. The town of Wentwater is ?like invisible ink. It is disappearing as fast as it's being penned. Can we undo our words? Just what can words do? They have the power to bring others to Christ or turn them away for ever. Words hold such power. They can bring love or they can cut like a dagger in hate. Words can undo us or make us feel complete.

Lakin brings fantasy alive and puts a twist on Sleeping Beauty. This is the fourth book of the series. Just imagine, there will be seven tales of heaven when the series is complete. This series is for everyone. If you enjoy fantasy you will be captivated by this series. We see superstition at it's highest and what happens with the truth of words. The characters are rich and vibrant.

Lakin has weaved together a wonderful story that takes us to a place where imagination is at it's best and story telling is at it's grandest height. We see good and evil and the best part is we see God prevail and we see victory won.

Whether adult or young adult, you will fall in love with this series. If my children were still young and at home, bedtime would be after a reading of, "The Gates Of Heaven Series". You will be captivated before you hit chapter 2.
—Robin Prater

▼▲
I'm the author/artist and I want to review #4: The Unraveling of Wentwater - eBook.
Back
Back