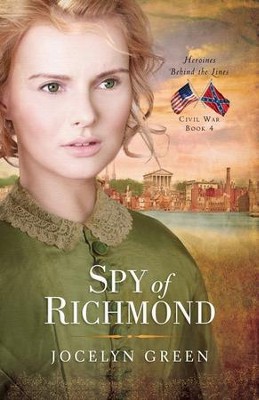 ▼▲
Richmond, Virginia, 1863. Compelled to atone for the sins of her slaveholding father, Union loyalist Sophie Kent risks everything to help end the war from within the Confederate capital and abolish slavery forever. But she can't do it alone.

Former slave Bella Jamison sacrifices her freedom to come to Richmond, where her Union soldier husband is imprisoned, and her twin sister still lives in bondage in Sophie's home. Though it may cost them their lives, they work with Sophie to betray Rebel authorities. Harrison Caldwell, a Northern freelance journalist who escorts Bella to Richmond, infiltrates the War Department as a clerk-but is conscripted to defend the city's fortifications.

As Sophie's spy network grows, she walks a tightrope of deception, using her father's position as newspaper editor and a suitor's position in the ordnance bureau for the advantage of the Union. One misstep could land her in prison, or worse. Suspicion hounds her until she barely even trusts herself. When her espionage endangers the people she loves, she makes a life-and-death gamble.

Will she follow her convictions even though it costs her everything-and everyone-she holds dear?

▼▲
JOCELYN GREEN is an award-winning author who inspires faith and courage in her readers through both fiction and nonfiction. A former military wife herself, she authored Faith Deployed: Daily Encouragement for Military Wives and co-authored The 5 Love Languages Military Edition with Dr. Gary Chapman. Her novels, inspired by real heroines on American's home front, are marked by their historical integrity and gritty inspiration. The books in the Heroines Behind the Lines Civil War series have been honored with gold and silver medals from the Military Writer's Society of America. Wedded to War was a Christy Award finalist in two categories. Jocelyn graduated from Taylor University in Upland, Indiana, with a B.A. in English, concentration in writing. She is an active member of the Christian Authors Network, the Advanced Writers and Speakers Association, American Christian Fiction Writers, and the Military Writers Society of America.Jocelyn lives with her husband Rob and two small children in Cedar Falls, Iowa. Visit her at www.jocelyngreen.com.

"Jocelyn Green’s Spy of Richmond is an enthralling tale of espionage with splashes of the intense hardships precipitated by war. Green continues to pen life into indomitable females who capture our hearts and imaginations. This novel, her fourth book in the Heroines Behind the Lines Series, revolves around Ms. Sophie Kent.

The only thing that Sophie Kent desires more than and end to the fighting is a Union victory that would guarantee the end of slavery. Her unwavering commitment to this basic human right draws her into a secret network of information gathering Union loyalists. In order to obtain critical military intelligence, she sacrifices her reputation, risking her heart and her very life. Sophie wonders if God will forgive her deception if it benefits the greater good.

I thoroughly enjoy Green’s novelistic prose. I especially liked how scriptures sprung to the minds of her core characters as the faced hardships - this seemed neither preachy nor forced. Excitement and anticipation gripped me as the cast traversed the Underground Railroad, endured the squalor of Confederate prisons, passed secret messages, and avoided pitfalls. All the while, Green’s character dialogue and inner musings flowed seamlessly.

As in her previous novel, Yankee in Atlanta, Green does not skirt around difficult subjects. She gives voice to the issues of mental illness, racial prejudice, starvation, cruelty, and wavering faith. Yankee in Atlanta readers will encounter a familiar person who I loathed through both books (by design, I’m sure). Don’t fret, if you missed the previous book in the series you will find that this book can stand fine on it’s own.

Spy of Richmond is a tour de force of Civil War Era historical fiction. A tremendous testimony to the resilience of the human spirit and the power of faith. I give it 5/5 stars."

"Thanks to Netgalley and Publishers for a copy of this book

I preordered this book as soon as I was able to. And the only reason I requested it on netgalley was because I am too impatient to wait until March to read it!

I actually read the second book in this series first, and LOVING it, I read the first and the third as soon as it was released. I love historical fiction set during the Civil War and I have loved this series especially because it focused on the females who lived and survived the Civil War. This series is just as good as Lynn Austin's Civil War series. And those are some of my all time favorite books.

As in the previous books, Green does a marvelous job weaving historical facts into the story. I felt like I was in the tunnels under Libby Prison digging a way out! I was so wrapped up I was horrified and saddened when Richmond burned and rode the rollercoaster of emotions as the end of a horrible war drew near with the Sophie and Bella. I loved reading more about Libby and Silas and Charlotte and Dr. Lansing. Even Noah and Caitlin had a part in this story And it all flowed together. This book and the Widow of Gettysburg are my two favorites of the series. Highly recommended for history lovers and anyone interested in learning more about the Civil War."

"This is the fourth book in Jocelyn Green’s Heroines Behind the Lines Civil War series.  Although I have only read the first so far, this story is complete and is enjoyable without previously reading the others.  It is historical fiction based on the spy rings that flourished in Richmond during the Civil War.

Sophia Kent is a southern belle who is appalled by the injustice that she sees being endured by both the slaves in the South and the Union soldiers at Libby Prison.  Thwarted by her father in her attempt to release her personal slaves, she treats them with kindness and compassion.  Horrified by the lack of good food and the filth and cruelty suffered by the Union prisoners, she devises a way to get food to them.  Still, she wants to do more and it becomes apparent that the only way for this to end is the Civil War must conclude with a northern victory.  She is enlisted by Elizabeth Van Lew along with others in a dangerous ring of espionage that keeps her one step away from the hangman’s noose.

I enjoyed the thought provoking, moral dilemmas that the author presented.  The characters must make difficult choices that put their lives and their loved ones in danger.  It tests their faith as they learn to lean on God.   She weaves a believable story with credible characters and historical facts to make a delightful book to curl up with.  Don’t pass up this or the rest of the series."

▼▲
I'm the author/artist and I want to review #4: Spy of Richmond.
Back
Back