Skip to main content
#4: Spiderweb for Two
By: Elizabeth Enright
Stock No: WW376011 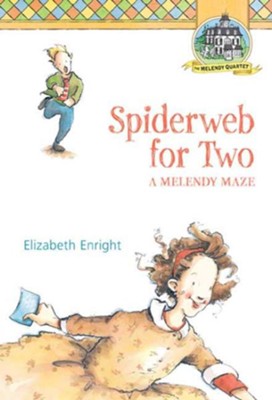 ▼▲
Melendy Quartet Volume #4, Spiderweb for Two: A Melendy Maze, picks up with Randy and Oliver home alone with Cuffy. Mona's off in the city with Mrs. Oliphant, Rush is away at boarding school, and Randy just knows it'll be the worst winter of her life. . . but that's before she receives a surprise message in the mailbox. Taking them through the season with challenging riddles, the children's message brings them to a rich reward. 207 pages, softcover.

Randy and Oliver Melendy awake one fall morning full of gloom. Their brother and sister are away, the house seems forlorn and empty, and even Cuffy, their adored housekeeper, can't pick up their spirits. Will they have to face a long and lonely winter? But a surprise message in the mailbox starts a trail of excitement and adventure that takes them through the cold season. When summer finally comes around again, the children have found fourteen messages in all, and the end of the search brings them a rich reward.

Full of unforgettable moments (like finding a secret note tucked under the dog's collar) and delightful twists of language (the more challenging clues, the better), this fourth book in Elizabeth Enright's Melendy Quartet makes for a grand finale to an equally grand collection of stories. Spiderweb for Two is the fourth and final installment of Enright's Melendy Quartet, an engaging and warm series about the close-knit Melendy family and their surprising adventures

Elizabeth Enright (1909-1968) was born in Oak Park, Illinois, but spent most of her life in or near New York City. Her mother was a magazine illustrator, while her father was a political cartoonist. Illustration was Enright's original career choice and she studied art in Greenwich, Connecticut; Paris, France; and the Parson's School of Design in New York City. After creating her first book in 1937, she developed a taste, and quickly demonstrated a talent, for writing.

Throughout her life, she won many awards, including the 1939 John Newbery Medal for Thimble Summer and a 1958 Newbery Honor for Gone-Away Lake. Among her other beloved titles are her books about the Melendy family, starting with The Saturdays, published in 1941. Enright also wrote short stories for adults, and her work was published in The New Yorker, The Ladies Home Journal, Cosmopolitan, The Yale Review, Harper's, and The Saturday Evening Post. She taught creative writing at Barnard College. Translated into many languages throughout the world, Elizabeth Enright's stories are for both the young and the young at heart.

▼▲
“The Melendys are the quintessential storybook family...[their] ardent approach to living is eternally relevant.” —Publishers Weekly

▼▲
I'm the author/artist and I want to review #4: Spiderweb for Two.
Back
Back