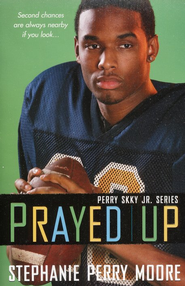 ▼▲
Like many teenagers, Perry Skky Jr. has made some mistakes. Good thing God is always on his side... Now that he's taken his relationship with Savoy to the next level, Perry is having some major regrets--and all this anxiety is starting to affect his game. When he drops a pass during the season opener, the press has a field day and Perry is distraught. Quickly, things are put into perspective when, on the flight home, their plane has to make an emergency landing. Suddenly, Perry starts seeing things clearly. Admitting that he's let God and his team down, he makes a solemn vow to stay pure and give his all to the game. Unfortunately, it might already be too late. Savoy gives him dreadfully, unexpected news--and even if it all pans out, he doesn't see how things can ever be the same between them. Perry wishes he could rely on the wisdom of his friends, but they all seem to be caught up in some kind of trouble, too. Now he has only one choice if he wants to find peace and keep his unraveling world together: stay connected to God. Can he?

▼▲
I'm the author/artist and I want to review #4: Prayed Up.
Back
Back